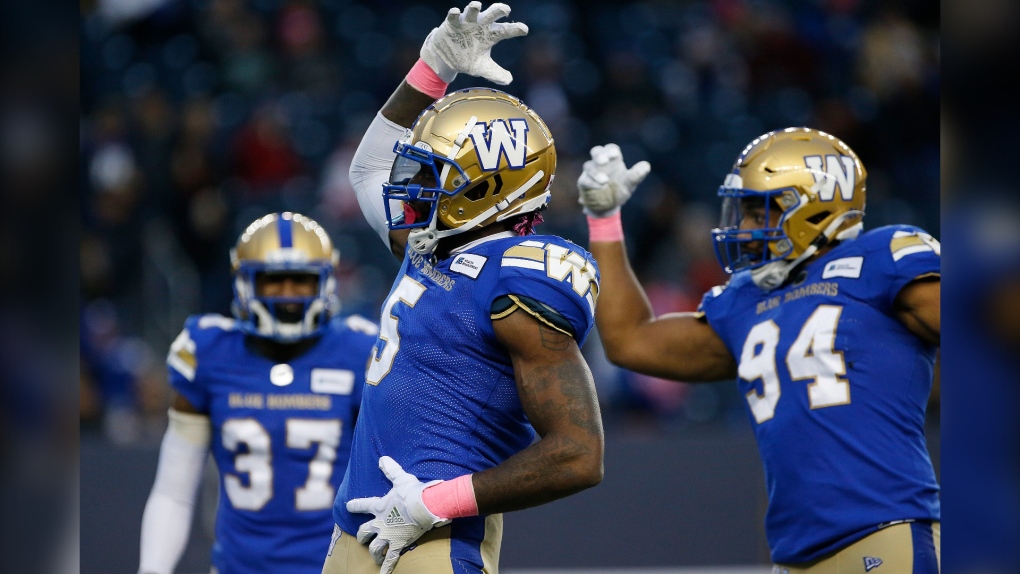 Zach Collaros passed for 267 yards and three touchdowns to help the Winnipeg Blue Bombers clinch first place in the CFL West Division with a dominant 45-0 blanking of the B.C. Lions on Saturday.

It was Winnipeg's eighth straight victory and boosted the club's record to 10-1 in front of 23,750 fans at IG Field, where the team will host the division final on Dec. 5.

The Bombers will host a divisional final for the first time since 2011 and the first West final since 1972. They also spent time in the East Division.

The loss dropped the Lions to 4-6 and extended their losing streak to four games.

The last time Winnipeg held an opponent scoreless was Oct. 13, 2018, in a 31-0 victory over the Saskatchewan Roughriders.

The defending Grey Cup-champion Bombers, who have a bye next week, earned touchdowns on offence, defence and special teams.

Second-year Bombers running back Brady Oliveira, making his fourth start this season in place of injured Andrew Harris, scored his first career TD on a two-yard run in the third quarter. The Winnipeg-born 24-year-old finished with 17 carries for 65 yards.

With 2:05 left in the game, Janarion Grant returned a punt 63 yards for a major.

Collaros was replaced by Sean McGuire midway through the fourth quarter after completing 16-of-20 pass attempts with the three TDs and no interceptions. Reilly was 15-for-31 for 131 yards and one interception.

Each of the Bombers' first-quarter TD drives featured big-yardage plays.

A Grant 32-yard punt return got the Bombers started at B.C.'s 34-yard line and then Lawler stretched up for his 14-yard catch in the end zone at 5:38.

B.C. conceded a single on the following kickoff and Winnipeg led 8-0.

Bombers receiver Darvin Adams burst down the field for a 52-yard catch-and-run, with B.C. defensive back Marcus Sayles (a former Bomber) making the TD-saving tackle. The drive ended with Bailey's 17-yard TD reception in the end zone at 11:10.

Reilly marched the Lions down to Winnipeg's 39-yard line late in the first quarter, but a dropped pass by Bryan Burnham and a knocked-down pass attempt halted the drive. Camacho then missed his field-goal try.

The Lions continued to start drives deep in their own end and had to concede a punt single with 1:51 left in the half to give Winnipeg a 16-0 lead.

Oliveira's TD run at 7:11 ended a 10-play, 88-drive that was aided by a pass-interference penalty on B.C., and one for roughing the passer that was unsuccessfully challenged by Lions head coach Rick Campbell.

After Jefferson intercepted Reilly and ran into the end zone, he rolled and then got up to celebrate with his defensive teammates and strut with the football to cheers of fans.

Lawler's second TD at 1:57 of the fourth quarter came after a B.C. turnover on downs.