Bombers down Lions 33-23 in season opener 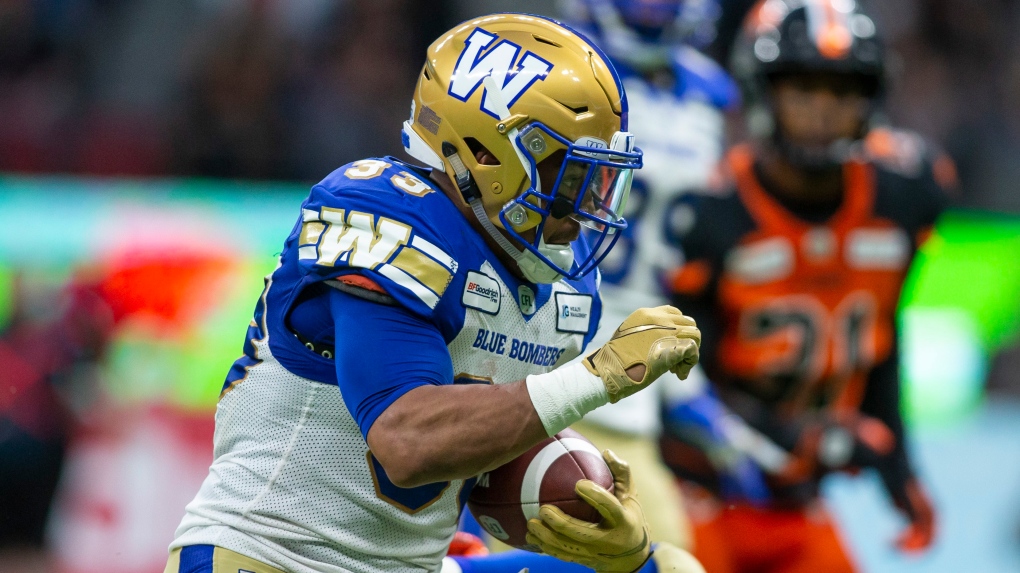 Winnipeg Blue Bombers' Andrew Harris (33) runs the ball against the B.C. Lions during the second half of CFL football action in Vancouver, B.C., on Saturday June 15, 2019. (The Canadian Press/Ben Nelms)

"It's about the details. The championship teams play the details better than anyone else. And you make the average plays every day," Claybrooks said. "Being bland is great in this game. If you're bland and you're doing what you're supposed to do, you'll be just fine."

Errors weren't limited to a single area, the coach added.

"It wasn't just the offence or the defence or special teams. Every unit took a turn messing up the play," he said. "But when you play a good team like (Winnipeg), they'll make you pay for those mistakes."

The game, a season opener for both sides, wasn't pristine for the Bombers either, said coach Mike O'Shea.

"This one was an odd one," he said. "This game had everything. As a head coach we will scoot out of here with the two points but we have a lot of work to do to clean it up all up. It certainly wasn't the cleanest game you would hope for."

Both teams had errors, but the Bombers (1-0) kept fighting, said quarterback Matt Nichols, who tossed for 184 yards and three touchdowns, finishing 21 of his 33 passing attempts.

"We played some good complimentary football, all sides picking each other up," he said. "That's what this team is all about, having each others backs."

B.C. underwent a massive revamp of the roster and coaching staff over the off-season, so Winnipeg wasn't entirely sure what they would face on Saturday, Nichols added.

"I think we had a good plan that kind of handled everything, converted some good second downs," he said. "We finished off drives with touchdowns instead of field goals which was key tonight."

Receiver Drew Wolitarsky reeled in two strikes for the Bombers, while Darvin Adams added another. Quarterback Chris Strevler also managed to sneak across the goal line.

The momentum swung in the third quarter after Lions quarterback Mike Reilly threw a 15-yard touchdown pass to Lemar Durant.

B.C. kicker Sergio Castillo lined up for the conversion, but his attempt was blocked by Winnipeg's Marcus Sayles.

Bombers defensive back Brandon Alexander picked the bouncing ball off the turf and got it off to Chandler Fenner, who ran it 80-yards down the field to collect two points for Winnipeg.

"It's a good play. They are very smart guys," O'Shea said. "They know there's no consequence to pitching it. They have to keep that ball alive. It was well executed."

Reilly tallied 324 passing yards for the Lions (0-1), connecting on 22-of 39-attempts. He threw one TD pass and two interceptions.

The Lions had a decent passing game, the receiver said, but struggled on the run and with getting across the goal line.

"We just didn't finish drives. We made big plays but then we stalled and left a lot of plays out there on the field," Burnham said.

"I think this one kind of snuck up and punched us in the face. It woke us up a little bit."

One bright spot for the Lions was Brandon Rutley.

Rutley played just one game for B.C. last season, where he suffered an ACL tear.

In hindsight, the injury was a "blessing in disguise," he said, adding that he had a chance to spend more time with his now wife.

"I needed that balance," Rutley said. "And that helped me with my recovery and getting to this point."

Next up, the Lions will visit the Eskimos in Edmonton on Friday.

The Bombers have a bye next week and will return to action on June 27 when they host the Eskimos.