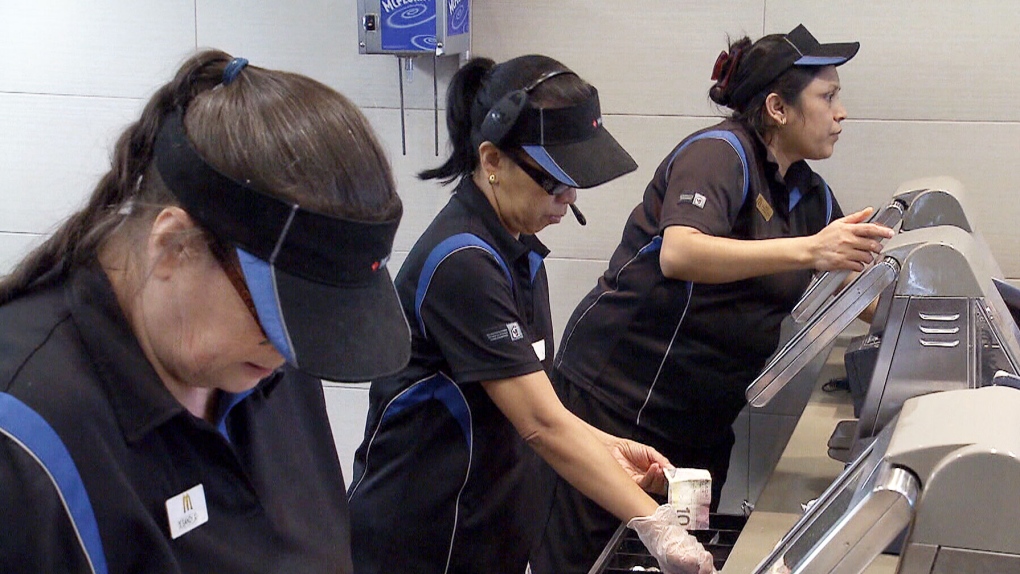 The Canadian labour market capped off 2014 by losing 4,300 net jobs in December, a slight dip from the previous month that left the unemployment rate locked at 6.6 per cent, Statistics Canada said Friday. (File image)

OTTAWA -- The Canadian labour market capped off 2014 by losing 4,300 net jobs in December, a slight dip from the previous month that left the unemployment rate locked at 6.6 per cent, Statistics Canada said Friday.

The agency's latest job-market survey found that Canada added 185,700 net new positions in 2014, with the bulk of the increase coming in the second half of the calendar. The unemployment rate, meanwhile, moved down over the course of the year from 7.2 per cent.

"I think we can say it was a fairly good year for employment -- nothing through the roof, but it was just a decent year," said Jimmy Jean, a senior economist with Desjardins Capital Markets.

"Looking forward, we continue to expect the Canadian economy to benefit from the U.S. acceleration... so we should continue to see a very decent pace of job creation on an overall basis."

For December, the agency's report found the country gained 53,500 full-time positions, a tally more than offset by a loss of 57,700 part-time jobs.

December was the second straight month the survey registered a small drop in employment. The economy shed 10,700 net jobs in November, but those decreases followed large back-to-back increases of 74,100 in September and 43,100 jobs in October.

The unemployment rate matched the projection of economists, who had also predicted a net gain of 15,000 jobs for December, according to Thomson Reuters.

Experts were watching for clues that Canada's economic strength was shifting from the energy sector to manufacturing, an expected fallout from the lower loonie and the oil prices that began to plummet in October.

Jean said he was surprised to see the natural-resources sector add 10,200 jobs across Canada in December, while the manufacturing industry lost 18,300 positions.

"We've kind of been expecting the opposite to be at play with the weaker currency," he said.

"I think it speaks volumes to the challenges still faced by the (manufacturing) sector. Even if the currency is weaker, it's going to take time before businesses really start to invest."

By industry, accommodation and food services saw the biggest job one-month decline in the survey, losing 32,800 positions in December. But, over 2014, the category had added 38,300 jobs.

The Statistics Canada findings also show the youth unemployment rate moved up 0.3 percentage points in December to 13.3 per cent, but that 62,500 more young people had jobs compared to a year earlier.

The survey found that 23,600 fewer women between the ages of 25 and 54 were working last month. The unemployment rate, however, for that category remained unchanged at 5.2 per cent as fewer participated in the labour market.

For men, the agency said 22,600 more males in the same age bracket found employment last month, which nudged the category's jobless rate down 0.2 percentage points to 5.5 per cent -- its lowest level since 2008.

CIBC chief economist Avery Shenfeld said Friday he expected the "weak headline" in the December numbers to apply pressure on the Canadian dollar, but he thought the details provided "some comfort."

"The story for Canada is all about what lies ahead given the recent drop in energy prices, rather than the (fourth-quarter) picture," Shenfeld wrote in a note to clients.

The senior policy adviser from the left-leaning Broadbent Institute think-tank was disappointed by the 2014 job numbers.

"2014 was a pitiful year for Canadian working people," Andrew Jackson said Friday in a statement released by the organization, which was founded by former NDP leader Ed Broadbent.

Jackson said the lower unemployment rate was likely due to the fall of the country's participation rate, a number that tracks Canadians with jobs and those looking for jobs as a percentage of the working-age population.

However, while some believe a declining participation rate is a clear indicator that thousands of people have become too discouraged to look for work and have left the workforce, some experts argue it could also be due to the fact many baby boomers have started to retire.

Statistics Canada plans to publish a year-end review of the 2014 numbers on Jan. 28.