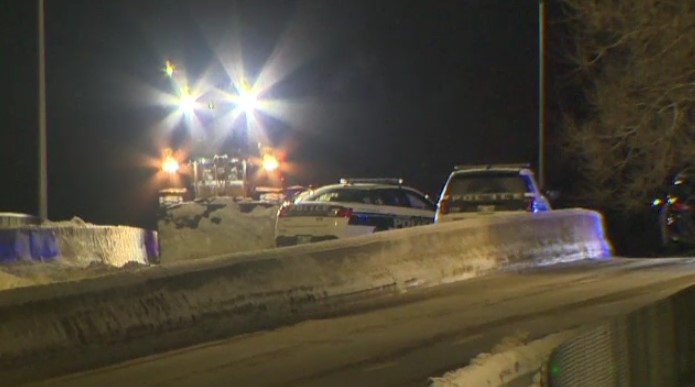 Police on scene of the crash on the Disraeli Freeway.

One person is dead and two others are injured following a crash on the northbound lanes Disraeli Freeway bridge on Tuesday night.

The crash, which took place around 10:30 p.m., involved a front-end loader,

Winnipeg police allege the crash occurred when the driver of a car sped up in an attempt to pass the snow-clearing vehicle.  Police said the driver then lost control and crashed into the loader.

According to the police, crews with the Winnipeg Fire Paramedic Service extricated the driver and front passenger from the car involved in the crash.

The traffic division is investigating the crash. Anyone with information is asked to call 204-986-7085.

Fourth-grade teacher Irma Garcia was killed in her Texas classroom on Tuesday, massacred along with her co-teacher and 19 students. Two days later, a family member says her brokenhearted husband died.

The gunman who massacred 19 children and two teachers at a Texas elementary school was inside for more than an hour before he was killed in a shootout, law enforcement authorities said Thursday amid mounting public anger and scrutiny over their response to the rampage.

One man is dead after being shot by police near a Toronto elementary school on Thursday afternoon. The incident sent hundreds of students into lockdown.

The Edmonton Oilers defeated their Alberta rival Calgary Flames 5-4 in overtime in Game 5 of their second-round NHL playoff series Thursday night to advance to the Western Conference final.

A 10-year-old boy in a classroom just down the hallway from the room where a gunman killed 19 children and two teachers in Uvalde, Texas on Tuesday said the experience of hiding during the shooting was 'terrifying.'

A massive Russian plane that was grounded at Toronto Pearson International Airport back in February is racking up a substantial parking bill.

Monkeypox cases up to 26; first case detected in Ontario: PHAC

There are now 26 confirmed cases of monkeypox in Canada, according to an update from the Public Health Agency of Canada, and the virus has been detected in a new province, with one case in Ontario.

Canada's job vacancies are at a record high