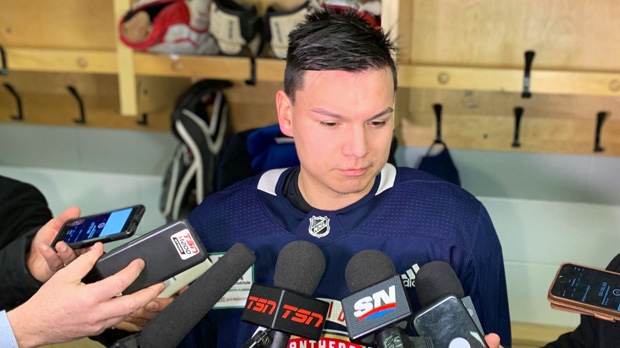 Brady Keeper is pictured speaking to media ahead of his debut against the Ottawa Senators Thursday. (Source: Florida Panthers/Twitter.)

When 22-year-old Brady Keeper skates onto the ice Thursday in Ottawa for his first game playing for the Florida Panthers, he’ll have plenty of supporters to cheer him on.

Keeper is the first Pimicikamak Cree Nation man to make it to the NHL, and his father said most of his family made last minute plans to fly out and see the defencemen’s first game.

“There has been a lot of excitement, and I’m pretty sure there’s going to be more,” Brady’s dad Anthony Keeper said, explaining he’s also seeing tons of Facebook posts from people who will be watching in Cross Lake, Man.

Brady’s journey to the NHL began with early mornings for Anthony, when Brady and his four brothers were young.

“I used to get up early in the morning, like 4 a.m. in November, because it was the coldest time in the night, 4, 5 a.m., that’s when I used to start my flooding,” he said, explaining that Brady first played hockey with his brothers on a backyard rink.

“We used to have our skating rink by the end of November, come Christmas, they were always there,” he said.

“And eventually some of the kids from school were in minor hockey, and they wanted me to register them and that’s what I did, but they always had that rink,” he said, describing it as a mini-daycare that attracted plenty of neighbourhood kids.

“Sometimes I had to go out there and stop fights when it was getting out of hand. He’s got two older brothers, I think that’s what made him kind of, a little bit more advanced with his age. Because he was, at times, battling with his older brothers.”

Anthony said Brady worked really hard to become a better player, and being cut from a couple of AAA teams early on only seemed to motivate him to work harder.

It was when Brady went to play Junior B hockey in Norway House, Man., that Anthony said he noticed “he really excelled.” Brady’s next move was to play in the MJHL for the OCN Blizzard.

“And then when he was an OCN, there was an assistant coach from Maine that showed up,” remembers Anthony.

“That’s when, this thing is going further than I thought, I thought, when they showed up in OCN at the Blizzard rink.”

Anthony said Brady’s move to play hockey for the University of Maine was a challenging one, and Brady was torn at the time since a baseball team he was on was competing in the Canada Games. But Anthony said he encouraged his son to stick it out, and when an advisor asked, “What could we do to make Brady stay?” he suggested his son’s long-term girlfriend, now the mother of his seven-month-old son, could visit him.

Anthony said she’ll be in the crowd Thursday along with all four of Brady’s grandparents, all of his brothers except his twin, who couldn’t take time off work, his aunties and others from Cross Lake.

He said the community is proud and inspired.

“There’s been quite a change in, I guess the attitudes, especially for the young kids. They realize, I think, now, that anything is possible if they don’t quit, they stay on the right path, and stay in school.”

“He’s a good kid. Respectful, and all that stuff. I haven’t had any trouble with him as he was growing up, he was always trying to do what we told him to or what we preached to the boys.

“He was always on the right track,” he said. “The only time I used to get mad at him was at the rink there when he was scrapping it out with his brothers, or the neighbour’s kids.”