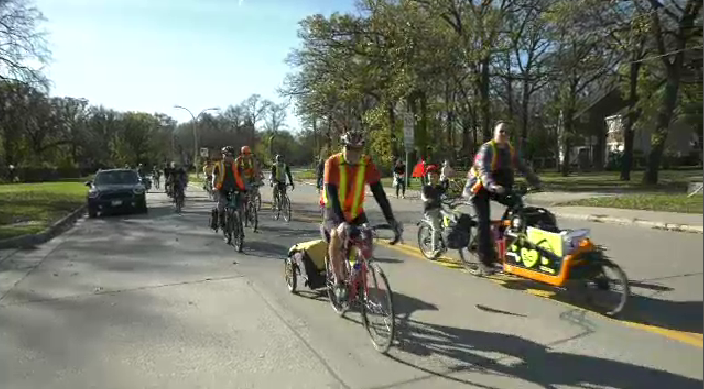 Over 60 cyclists took to the streets Sunday, pedalling in support of active transportation and doing their part to curb the climate crisis.

Ride for the Future organizers said active transportation is a great way to lower carbon emissions by getting people out of their cars and onto bikes, foot, taking transit, and sharing rides.

"We would like the city to acknowledge climate change is a serious concern and it's something that we need to act on now,” and said Ian Walker, advocacy chair for Bike Winnipeg.

Julia Schroeder, the chair of the outreach and education committee for Bike Winnipeg, said cycling infrastructure has improved over the past decade, but the group was out to continue advocating for a shift in transportation methods.

Three active transportation-friendly motions were introduced at city hall last week, and go before the executive policy committee on Wednesday.

They include motions for a mode shift, so 50 per cent of all transportation in Winnipeg will move away from cars to active or public transportation, and to include cycling infrastructure on major road projects.

The final motion, put forth by City Councillors Matt Allard and Scott Gillingham, is to spend 10 per cent of the city’s roads budget on active transportation.

“Despite the fact that most of our city policy documents have active transportation, it’s a huge part of what our city should be doing. It’s often not funded at the level it needs to be in order to support a network that works for all people,” said Schroeder.

This was Bike for the Future’s third event this year, with another planned for Halloween with costumes being encouraged.

For more information, you can head to the Bike Winnipeg Website.