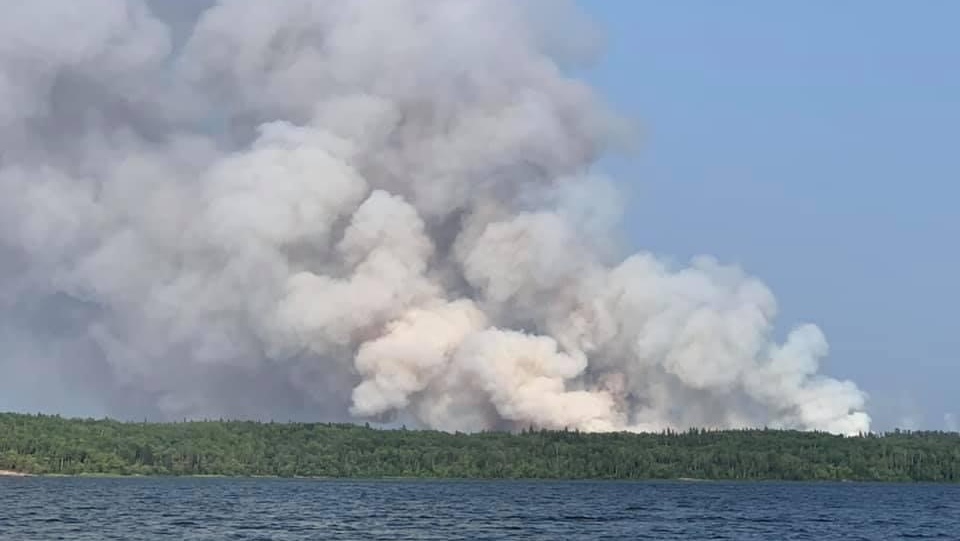 Smoke from numerous forest fires is blanketing much of southern Manitoba and it’s affecting the air you breathe.

Crews are fighting fires in northwestern Ontario and east-central Manitoba including several smaller ones in Whiteshell Provincial Park but on the weekend, officials said someone flying a drone interfered with emergency operations on the Camp Lake fire.

“The water bomber was attempting to come into West Hawk (Lake) to scoop water for fire fighting and unfortunately with the drone being flown into the airspace, they had to abort the mission,” said Don Hallett, assistant director with the Manitoba Wildfire Service.

A provincial spokesperson later added it happened on the south shore of West Hawk Lake. The drone is described as white with a metallic green tail. The spokesperson said there were a lot people in the area, but no operator was spotted.

Drone operators must be licensed but Hallett said the incident has been reported to Transport Canada. He said that’s because the airspace surrounding a wildfire is normally closed to all aircraft excluding commercial planes and those directly involved with fire fighting.

“If there’s a fire in an area please do not deploy your drones because the odds are we’ll have helicopters or water bombers coming into an area to fight that fire,” Hallett said.

The province is asking anyone who witnessed the incident to contact Falcon Lake RCMP.

According to Transport Canada’s website individuals who fly drones where they’re not allowed—including too close to forest fires—could face fines or even jail time.

Meantime the risk of more fires starting is so high, the province has just imposed level four fire restrictions in one remote region east of Lake Winnipeg extending to the Ontario border between the Wanipigow River and Poplar River which includes Atikaki Provincial Park.

Level four restrictions effectively mean the area will close as of 8 a.m. July 20. There’ll be no access permitted and a travel ban will go into effect. People won’t be allowed to go their cottages in the area and permanent residents must be ready to leave on an hour’s notice, according to a notice put out Monday afternoon by the province.

Several other areas of the province, which include provincial parks, remain under level three restrictions which prohibit all backcountry travel and backcountry camping. Campfires aren’t allowed and most trails are closed with the exception of a few in developed areas.

Camping in developed areas is still allowed but campfires are banned in most areas with that exception of some pockets of northern Manitoba where they’re still allowed between 8 p.m. and 8 a.m.

For those who are camping, smoky conditions have covered the skies across much of the province.

North and northeast winds have the Whiteshell and much of southern Manitoba under a blanket of thick forest fire smoke, prompting Environment and Climate Change Canada to issue a special air quality statement.

The Manitoba Wildfire Service said large fires in Nopiming Provincial Park and west of Atikaki Provincial Park are contributing to the problem. It comes amid tinder dry conditions which experts have warned will become more common due to climate change.

“It just really sucks because of the fire restrictions so there’s no campfires and that’s part of camping,” said Donkersloot.

There are also several small fires sparked by lightning, which have so far been contained by ground and air crews, burning in the Whiteshell.

Most campers said so far, the smoke hasn’t affected their stay.

But with most hiking trails closed and campfires and backcountry travel banned they’re hoping conditions change.

“It would be really nice to get a couple inches of rain so we could get campfires going and a better camping experience,” said Donkersloot.

The Manitoba Wildfire Service said so far it’s not aware of any properties threatened by fires.

Hallett said communities have been advised smoke will make it harder for some people to breathe.