An A&W restaurant went up in flames Sunday evening.

The Winnipeg Fire Paramedic Service was called to the restaurant in the 1400 block of Main St. around 5:15 p.m.

When crews arrived, they say flames were shooting through the roof.

High heat and heavy smoke forced them to retreat and fight the fire from outside.

Stuart and Zoey Brick were driving along Main Street when they saw smoke and decided to pull over.

Stuart went to look into the restaurant while Zoey called 911.

“The restaurant was closed and the whole roof was on fire so we evacuated to a safe distance and waited for the fire fighters to arrive,” said Stuart.

Here is some footage I was able get. pic.twitter.com/Yap8cqJwwU 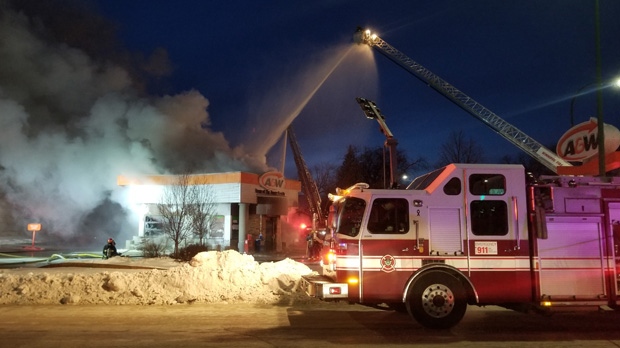 Members with Salvation Army attended the scene and served hot food and drinks for first responders.

Crews are expected to be on scene well into the evening.

Drivers are asked to stay clear of the area.