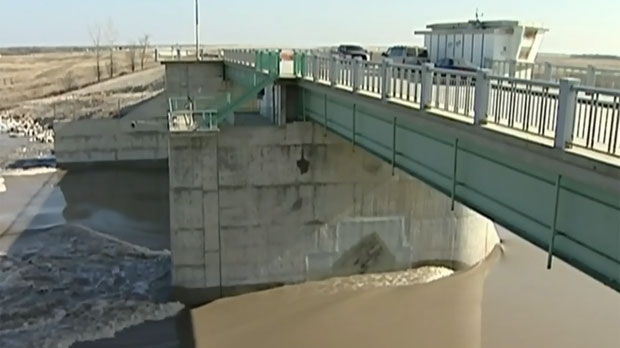 The Red River Floodway near south Winnipeg is shown in a file image.

The floodway was put into operation due to the impact of heavy rain in September, which was followed by a massive winter storm on Thanksgiving weekend that dumped wet snow across much of Manitoba.

As of Thursday, the Red River was sitting at 15.97 feet at James Avenue. For comparison, that’s nearly ten feet higher than normal summer water levels and nearly 16 feet higher than the typical level of winter ice on the Red.

The province said while the gates will be lowered Thursday, it’s expected the river will still be high enough to allow water to continue to flow into the floodway for the next few days.

Once the Red River drops another two feet, the flow will stop, likely sometime early next week.

Springhill Winter Park has begun making snow, but this fall’s wet conditions have slowed down preparations on their ski lifts.

The bottoms of three of its lifts are situated in the floodway which made for extra work for owner, Brayden Sosinkalo and his crew.

They had begun installing the lifts earlier this fall. When the province opened the floodgates, it forced Springhill to remove the lifts again.

Sosinkalo said they deal with flood waters every spring, so removing the lifts wasn’t a huge challenge. He said he stays in constant contact with the province and is always prepared to remove the lifts when the floodgates open.

One employee has been working at Springhill for 40 years and has never seen water like this in the Fall.

Last year Springhill opened Nov. 31. As long as the colder weather sticks around, he expects to be open in early December.