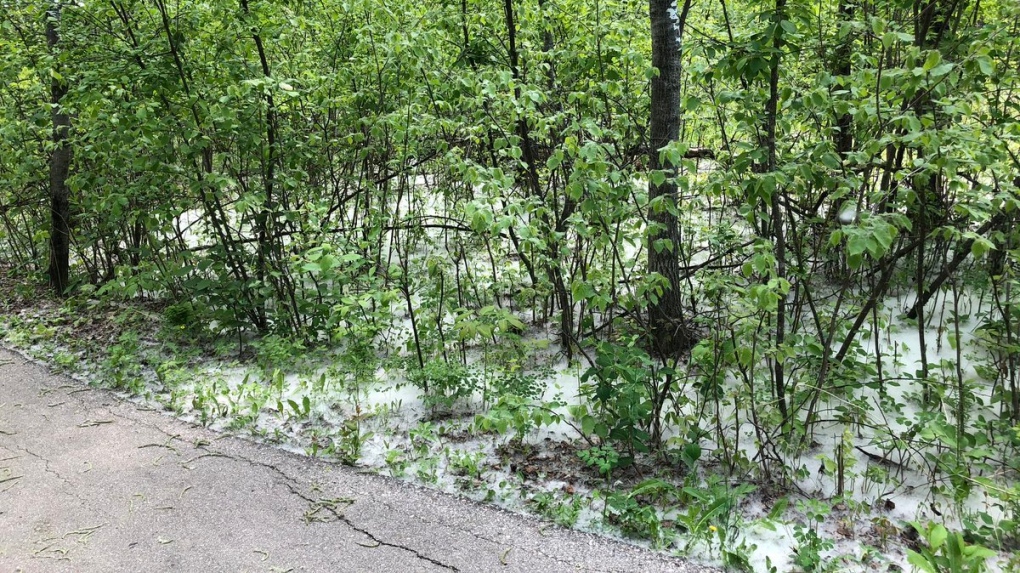 Winnipeg Counc. Janice Lukes tweeted this image of poplar seeds on the ground in Bridgwater, Man., on Saturday, June 8, 2019.

Some trees under stress could be the reason behind large amounts of seeds on forest floors and lawns this spring -- and the abundance of one ‘fluffy’ type has created an additional hazard for wildfires in Manitoba.

The City of Winnipeg said trembling aspen, the primary poplar variety in city forests, is producing more of the fluffy seeds than usual.

Photos show the seeds blanketing parts of Bridgwater Forest, and large patches of the seeds in several neighbourhoods have cropped up around the city.

The seeds may have caused trouble in the Assiniboine Forest fire, which saw crews work for two days to protect homes from spreading flames.

“The heavy seed load within Assiniboine Forest may have had an influence on the ease of ignition and speed which the fire was able to move,” said the city in a statement to CTV News.

The city said the seeds did not cause the fire and would have been only one factor in the spread of flames. The cause is believed to have been careless human activity, such as a bonfire or a cigarette.

Coun. Janice Lukes said after speaking with fire crews, she learned poplar fluff also played a role in a large grass and brush fire in Bridgwater Forest on June 1.

The fire stretched nearly 50 metres behind homes on Highland Creek Road according to a city news release.

Lukes said the fluff caught fire and raced through parts of the forest floor.

A week later, firefighters north of Winnipeg in Traverse Bay battled a fire that saw about half a dozen cottages destroyed.

University of Winnipeg forest ecology professor Andrew Park said the trees can produce millions of very light seeds that can blow long distances, and described them as ready-made tinder.

‘They’d be capable of igniting fires far from their point of origin,” said Park.

The seeds’ impact came as a surprise to life-long Winnipegger Brent Dilk.

“It looks like clouds,” he said Thursday night at The Forks, sitting beside a few mounds of the seeds.

Crazy amount of fluff (from Poplars I believe) in Bridgwater Forest. Have never seen so much fluff (or Ash seeds) -ever!?! pic.twitter.com/sg3M0p1OZh

Forest ecologist Andrew Park said that although elms normally produce a lot of seeds, the trees have been producing even more than usual this year.

He said the phenomenon happens about every seven to 12 years, depending on the species.

However, Park said, the increase in seeds will not correlate to the number of new elms sprouting in the city because most fall on sidewalks and roads and only a small percentage will grow into mature trees.

The city said Siberian elms appear to have a bit more seed production this year.

It said elms with bare branches should blossom in the coming weeks under normal conditions.

The City of Winnipeg said reasons for heavier seed production can be environmental stress in the previous year when the flower buds for the next year were developed.

“Winnipeg experienced drought in summer 2018 which could have contributed to the heavy seed production but the exact cause is difficult to determine,” the city said.

“Consecutive years of drought certainly has a negative impact on the trees.”

Homeowners are encouraged to water trees during dry periods.