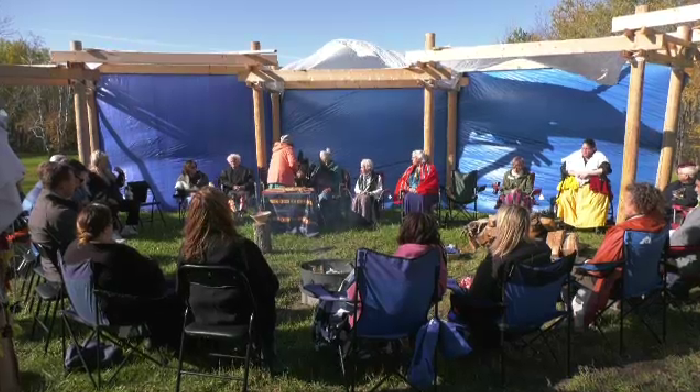 A former Manitoba Catholic youth camp is being repurposed as a healing village for Indigenous women.

Clan Mothers, a group of Indigenous women who work with those dealing with intergenerational trauma, held a ceremony Saturday on the grounds of the former camp in Belair, near Lake Winnipeg, to mark the beginning of a new kind of care.

Co-founder May Louise Campbell said the healing village will be a place that offers mid-term and long-term support for Indigenous women.

“We have to take those buildings down, we have to change this whole area and do it our way,” said Campbell.

The demolition of the existing building will begin next spring.

The Réseau Compassion Network, formally known as the Catholic Health Authority, donated the land to the Clan Mothers so they could build their healing village.

Campbell said the village will help the women living there discover who they are as Indigenous people.

“To reclaim so that we can continue to share our knowledge and our wisdom with all those who are open to wanting to learn,” said Campbell.

Elder Mary Brian, a Sixties Scoop survivor, said the healing village will also help the women who attend deal with their trauma.

“I think they will learn a lot about their culture, and how to use their cultural ceremonies and dance ceremonies. That will help them heal,” said Brian.

CEO of Réseau Compassion Network Daniel Lussier said he’s been working alongside the Clan Mothers on this project for close to five years.

He said returning the land to Indigenous people was the right thing to do, and a step towards reconciliation.

“We have a history we own with our organization, which is affiliated with the Catholic Church and its role in residential schools.  Not that this is solving that, but it is part of the long journey ahead of us,” said Lussier.

Prairie Architects has been working with the Clan Mothers on a voluntary basis to realize the vision for the new space.

Principal Architect Melissa McAlister said the first phase of the project is expected to start in the spring of 2022.

“It’ll be five cabins to start.  An elder’s cabin and a staff cabin, as well as a long house that will have kitchen facilities and multi-purpose space,” said McAlister.

Campbell said the demolition of the old buildings is part of the change that is needed for people to begin healing.

“Change has to happen and we need to be responsible for that change. Not you, not the government, not anybody else, we.”