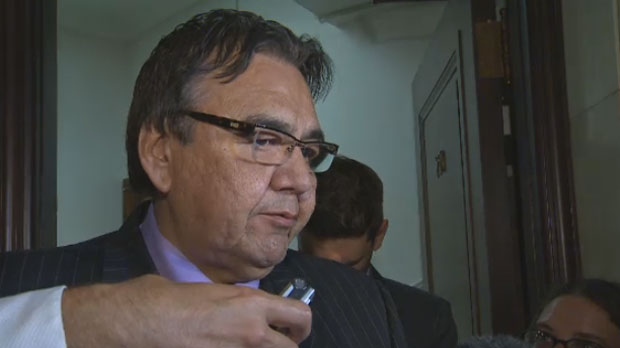 Eric Robinson, who served for several years as deputy premier, said the Manitoba New Democratic Party is no longer as inclusive as it once was. (File image)

WINNIPEG -- A longtime former Manitoba cabinet minister said Friday night he is leaving the provincial New Democrats and hoping to form a new political party to reflect the views of indigenous people and people of colour.

Eric Robinson, who served for several years as deputy premier, said the party is no longer as inclusive as it once was.

"The NDP has left some of its ideas in the woods, so to speak, and as a result, forgot its purpose," Robinson, 63, told The Canadian Press.

"The issues that are important to the average working person, to indigenous peoples, to people of colour, to new Canadians -- those kind of issues have been left dormant."

The party has also been sidetracked by infighting in recent months, he added.

Robinson, a residential school survivor and member of the Cross Lake First Nation, represented the northern constituency of Kewatinook, formerly known as Rupertsland, between 1993 and last April, when he was defeated by Liberal Judy Klassen.

He held cabinet portfolios including aboriginal and northern affairs, and served as deputy premier between 2009 and last year, when the Tories swept the NDP from power.

Robinson posted a message on Facebook Friday that read: "Indigenous People, People of Colour, LGBT, People Committed to Mother Earth, WE ARE NOT wanted by MB's NDP -- This is not the Party I have supported for over 40 years. It is time for our own. Join me and like-minded individuals, Details to follow."

Robinson said he has talked to others who are interested in setting up a new party.

He pointed to concerns over the high number of indigenous children in foster care and economic development in small communities as examples.

No one from NDP caucus or party headquarters was available to comment on Robinson's plans late Friday night.

The party has previously touted several steps it has taken on indigenous issues, including economic benefit agreements for hydro development, an apology to indigenous adoptees who were taken from their families during the so-called 60's Scoop, and an all-weather road connecting remote communities on the east side of Lake Winnipeg.

The party has suffered infighting since 2014, when five senior cabinet ministers challenged the leadership of then-premier Greg Selinger. Selinger survived the coup but stepped down after last year's election loss.

Interim leader Flor Marcelino has said the party remains divided and needs to undergo some sort of conflict-resolution process. The NDP are slated to choose a permanent leader in September.