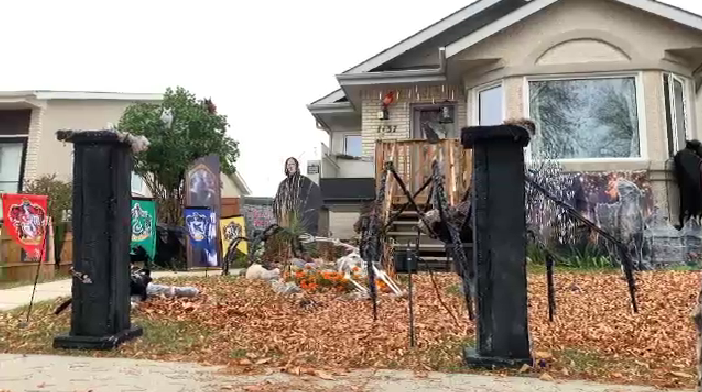 An online map highlighting some of Winnipeg’s best-dressed Halloween homes is taking the guesswork out of finding spooky decorations across the city.

The map, now going for about five years, began as a localized neighbourhood initiative. That changed with the arrival of the pandemic.

“I’d drive around and find these houses on my own and then share it with my local community group,” said Carol Cassell, creator of the Winnipeg Halloween Map. “The pandemic spurred me to do it for the entire city.”

Boasting about 36,000 views online, the map is proof Winnipeggers have an interest in viewing Halloween homes. The Winnipeg Halloween Map Facebook page has also gone from about 1,000 members on October 1, to close to 6000.

Cassell is no stranger to Winnipeg map making, having already made some showing Christmas homes, weekly garage sales, COVID-19 window gallery maps and ones for playgrounds and other attractions.

“I really like to see other people be happy,” said Cassell. “Putting the maps together and knowing those maps were going to bring some people joy really helps me get through the pandemic.”

Cassell said the maps take a bit of work, and with this year’s Halloween home submissions sitting at 162 so far this year, it keeps her busy.

That’s 162 forms with addresses that Cassel has to find time to enter into the map, but the work doesn’t stop there. To ensure the homes are worth a visit Cassell will ask for pictures. Sometimes she will even take the trip herself.

It is an extra step but a worthwhile one, according to Cassell.  It is based on experience gained with the Winnipeg Christmas Map where some submissions didn’t live up to expectations.

“There were some submissions that I was like, ‘Oh, some lights on a bush. That’s really not worth driving across the city,’” said Cassell.

This year, homes featured on the map are graded, with a black skull and crossbones taking the top spots. Homes with that label are “very decorated right now.”

Pumpkins indicate low-to-moderately decorated homes and then you have the moons, which are decorated on Halloween night only.

Decisions on where a home sits on the Halloween scale often rests on the shoulders of the person who submits the map entry. While not scientific, Cassell said enjoyment for children is a contributing factor.

“I think anything that gets kids excited to see is something I put down as very decorated. Inflatables, cool lighting, animatronics, stuff like that,” Cassell said.

When asked about Winnipeg’s top Halloween home Cassell pointed to a Harry Potter-themed house in Transcona. Not only is the house covered in Hogwarts décor and homemade props, it is also raising money for research and treatment of a rare disease one of its young residents has.

“They’ve even done a scavenger hunt. There’s a bingo sheet that’s been made available to print out, so people can come by with their families and look for everything in their yard,” Cassell said.

The map can be found online.