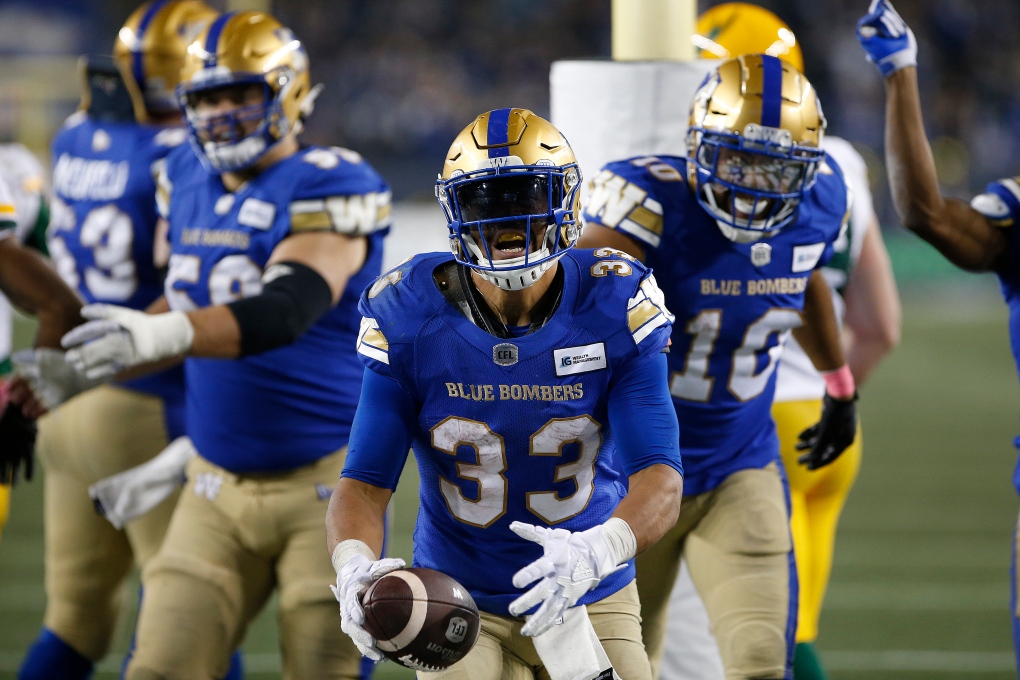 Winnipeg Blue Bombers' Andrew Harris (33) celebrates his touchdown against the Edmonton Elks during the second half of CFL action in Winnipeg Friday, October 8, 2021. (Source: The Canadian Press/John Woods)
WINNIPEG -

Andrew Harris and the Winnipeg Blue Bombers offence knew at halftime they were far from playing their best ball. He did something about it.

arris ran for two fourth-quarter touchdowns as Winnipeg extended its win streak to six games with a 30-3 rout of the Edmonton Elks on Friday.

"In the fourth there and later in the third, our O-line kinda put it together and started opening some big holes there," Harris said.

"We really wore that defence down, so we were able to accumulate some good yardage and have some success in the run game. They just dogged it out."

The Winnipeg-born running back chalked up 150 rushing yards, the 27th time in his 11-year career he's ran for more than 100 yards in a game.

The Bombers boosted their CFL-leading record to 8-1, while the Elks suffered their fourth straight loss and fell to 2-6.

"We got physically manhandled tonight," Elks head coach Jaime Elizondo said. "We were physically beat in every phase of the game, and that's the truth so we're not going to make any excuses.

"We got our asses whooped and we need to bone up and be a better team and find some better answers."

The teams face off in Edmonton next Friday.

Bombers quarterback Zach Collaros completed 16 of 27 pass attempts for 207 yards with one 16-yard TD toss to Nic Demski and one interception.

Edmonton QB Trevor Harris, making his first start after missing two games with a neck injury, was 9 of 22 for 87 yards and no picks. He was replaced by Taylor Cornelius about three minutes into the fourth quarter, who went 6 of 13 for 47 yards and one interception.

"I've never walked away from a game where I've been embarrassed. This game was embarrassing," Harris said.

He added his injury wasn't a factor and he wasn't using that as an excuse.

Bombers kicker Ali Mourtada had a tough outing. He made 2 of 3 convert attempts, connected on 24-yard field goal but missed three field-goal tries from 41, 47 and 46 yards.

"There's great players in this league that are gonna challenge us, no doubt about it, but they best believe that we're gonna be full-step on what we bring to the table and we've got to keep pushing the bar higher," Bombers linebacker Adam Bighill said.

Both teams' offences had a shaky start in the first half.

Harris didn't complete a pass until about six minutes into the second quarter.

Elizondo said it's never always a quarterback's fault, explaining he switched to Cornelius because of some missed opportunities and he thought the change would produce a spark.

Winnipeg also had some missed opportunities, beginning with the game's first pass. Defensive back DeAundre Alford dropped a pass Harris inadvertently threw right at him.

The Bombers did get to Edmonton's one-yard line on their first possession, but backup quarterback Sean McGuire was stuffed on third down. O'Neill ended up conceding a safety to give Winnipeg a 2-0 lead at 6:57 of the opening quarter.

Aided by a pass interference call on Edmonton, Winnipeg put up a nine-play, 68-yard drive that ended with Demski's TD catch.

The Elks conceded another safety 25 seconds into the second quarter, and Harris was 0-for-6 at that point and Winnipeg ahead 11-0.

Collaros was intercepted in the end zone by defensive back Jordan Hoover, who ran it back 70 yards before getting hauled down.

The turnover led to Whyte's 32-yarder at 7:24, a drive that included Harris's first completed pass. He was 1 of 8 at that point.

Bombers defensive back Deatrick Nichols blocked an O'Neill punt early in the third quarter, leading to Mourtada's 24-yard field goal and a 14-3 lead at 4:13.

O'Neill conceded a safety, and then the Elks gave up a single on Mourtada's missed 46-yard field-goal attempt.

Cornelius's first drive of the game ended with a turnover on downs, and his last throw of the match was an interception by Alford with 24 seconds remaining.

This report by The Canadian Press was first published Oct. 8, 2021.