'He backed up and then came straight at me': man hit by shoplifter’s getaway car

WINNIPEG – A Winnipeg man is recovering from a broken leg and cuts needing more than 30 stitches, after being hit by a vehicle while trying to stop shoplifters.

Police said on Oct. 23 at around 5:15 p.m. they were called to a business in the 2100 block of Pembina Highway, after a vehicle hit a man and took off.

The man hit, Brad Emch, said it happened while he was shopping at a Safeway.

“My spidey senses were tingling that something was going down,” he told CTV News. He went on to explain that he had noticed a couple who looked “cocky” and “suspicious” when he heard a security call come over the intercom.

“That’s when I noticed the girl walk out ahead and open the doors for the guy, and he just bolted with a basket full of meat and stuff like that,” he said.

“I just reacted saying, ‘Hey, I know where they’re parked, I’ll go get them.’”

Emch said he decided to chase them down.

Police confirmed an employee and customers went after the suspects and wound up involved in a struggle.

Emch said he had the man pinned at one point.

“Nobody actually came to my aid, they just all filmed it and watched, and that was it,” he said.

Emch said next, a man parked nearby asked him to move so he could get to his car to leave, so he did, and the suspect was able to get away and into a vehicle.

“He backed up and then came straight at me,” said Emch, explaining that the suspect drove right at him, hitting him against another car, which was also damaged.

Emch said the suspect backed up a second time and hit him again.

“As he was taking off he hit the car again, but missed me on the third attempt.”

Winnipeg police said the major crimes unit is investigating, and no arrests have been made.

The incident happened as Winnipeg social media users have been sharing videos of thefts at Liquor Mart.

Police have warned against getting involved.

Emch said having to rest while he’s healing has been difficult emotionally because he is used to being active.

“I have to get used to doing nothing,” he said.

He expects to be off work -- behind the scenes in the entertainment industry -- for a month or two.

“Gotta pre-plan everything now,” he said. “Emotionally, every once in a while, it’ll -- I’ll see it again and it just brings tears to the eyes and stuff.” 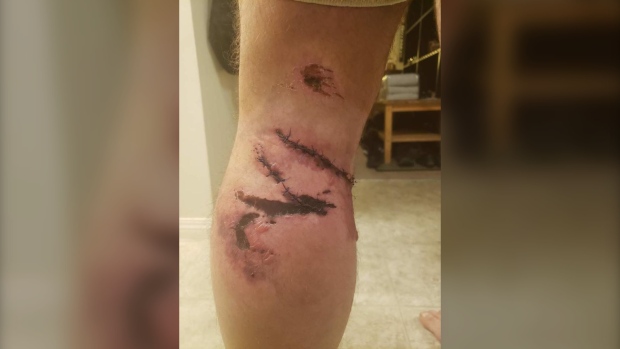 Emch’s friend Tom Kowalsky has started an online fundraiser for Emch that is more than halfway to its $5,000 goal.

Kowalsky said he understands why his friend stepped in.

“It happened right in front of Bradley, who is such a great human being, he just reacted,” Kowalsky said.

He is also organizing an event to celebrate Emch, a benefit concert at the Pyramid Cabaret.

“I’m actually quite overwhelmed by the response,” Kowalsky said.

“Friendship wise, my community has come together great,” he said, acknowledging Kowalsky, “And everybody else that’s helped, it’s made it all worthwhile, almost.”

-With files from CTV's Danton Unger and Stephanie Tsicos