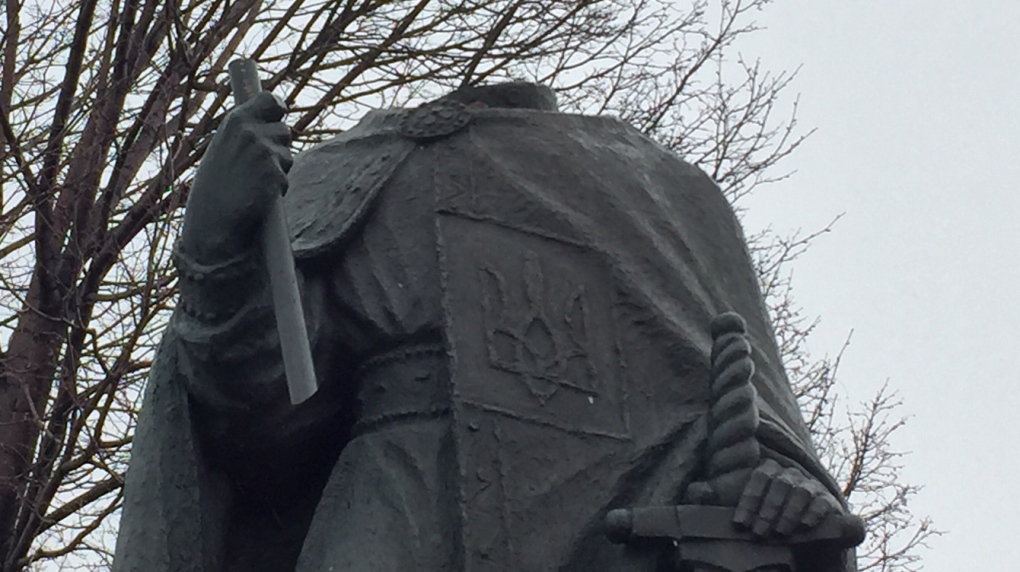 The vandalized sculpture, which sits outside the Sts. Vladimir and Olga Cathderal, is of St. Volodymyr. (Source: Gary Robson/CTV News)

UPDATE: A Manitoba church says the head of a vandalized statue has been safely returned.

Vandals had beheaded the St. Volodymyr statue on Tuesday.

Cathedral of Sts. Vladimir and Olga on McGregor St. shared the news on Facebook Saturday afternoon.

CTV News has reached out to the church for more details.

EARLIER: A Winnipeg community is left searching for answers after a statue outside a church was destroyed early Tuesday morning.

The vandalized sculpture, which sits outside the Cathedral of Sts. Vladimir and Olga on McGregor St., is of St. Volodymyr. During the incident both the head and a cross were removed from the monument.

Winnipeg police said they were notified about the incident around 1:50 p.m. on Tuesday, but believe it occurred around 4:30 a.m. that morning.

“It’s all sad you know. To have somebody come and do such vandalism without any rhyme or reason,” said Buyochok.

The statue, created by sculptor Leo Mol, was blessed by Pope John Paul II in 1984.

Buyachok said the church hopes the head is being sold for scrap metal, so it can be retrieved and fixed, otherwise they will have to find another artist to fix it.

“They’re very good people in this cathedral and to have this done to them, it’s just a painful experience,” he said.

Police ask anyone with information to contact 204-986-6222 or Crime Stoppers.