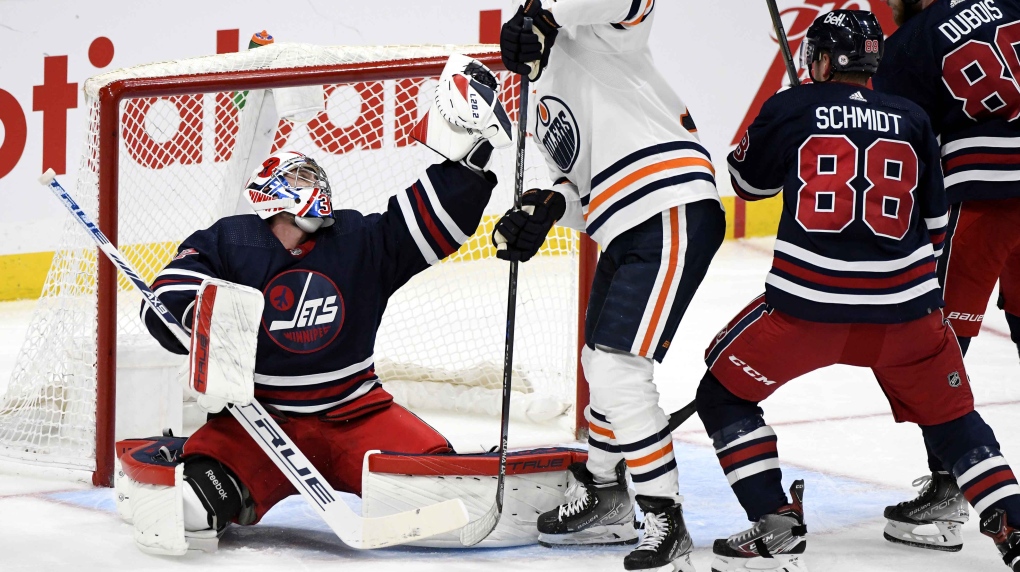 Winnipeg Jets goaltender Connor Hellebuyck (37) makes a a save as Edmonton Oilers' Jesse Puljujarvi (13) looks for the rebound during the second period of NHL action in Winnipeg, Tuesday, Nov. 16, 2021. THE CANADIAN PRESS/Fred Greenslade
Winnipeg -

Connor Hellebuyck made 32 saves as the Winnipeg Jets downed the Western Conference-leading Edmonton Oilers 5-2 on Tuesday.

Adam Lowry, Nikolaj Ehlers, Pierre-Luc Dubois, Mark Scheifele and Kyle Connor scored for the Jets (9-3-3), who were wrapping up a seven-game homestand (5-1-1). Josh Morrissey added a pair of assists.

NHL-leading scorer Leon Draisaitl had a pair of power-play goals early in the third period for Edmonton (11-4-0), giving him 17 goals and 33 points on the season.

Connor McDavid, second in league scoring, assisted on both goals to up his point total to 29 and keep alive his streak of notching at least a point in every one of his team's 15 games this season.

Mikko Koskinen stopped 22 of the 26 shots he faced before being replaced by Stuart Skinner to start the third period. The backup made eight saves. The loss put Koskinen's record at 9-2-0.

It was the first meeting between the clubs since the Jets swept the Oilers in the first round of last season's playoffs. They have a rematch in Edmonton on Thursday.

Winnipeg led 1-0 after the first period and 4-0 following the second.

Lowry got the Jets on the scoreboard at 2:09 of the first period with a blooper goal Koskinen should have stopped.

The Jets forward got the puck near his blue line and headed toward the netminder. He took a shot from the top of the circle and the puck hit Koskinen, went under him and started dribbling toward the goal line. He tried to swipe it away with his stick but missed.

Winnipeg, which has won three straight at Canada Life Centre, outshot the visitors 12-9 in the opening period.

Both goalies made some tough saves in the second.

After Koskinen stopped Morrissey on a close shot during a power play, Ehlers scored at even strength with a slap shot from the top of the circle to make it 2-0 at 6:59.

Sixteen seconds later, Draisaitl was dinged with a four-minute minor for high sticking and Winnipeg took advantage when Dubois redirected a Morrissey shot for his ninth goal of the season at 10:01.

Koskinen was screened for Scheifele's goal with 38 seconds remaining in the period.

The Jets led 26-20 in shots on goal heading into the third.

Andrew Copp was called for tripping at 1:19 and Logan Stanley took a boarding penalty at 2:26.

Draisaitl scored his first goal six seconds into the two-man advantage at 2:32. His second goal at 3:38 was initially waved off for goalie interference, but Edmonton coach Dave Tippett challenged and it was determined the Oilers player had been pushed into Hellebuyck.

Hellebuyck made a key save with 5:05 left when Jesse Puljujarvi took a shot just outside the crease.

Connor scored his team-leading 12 goal of the season into an empty net with 1:37 remaining.

This report by The Canadian Press was first published Nov. 16, 2021.

The Baltic nations of Estonia, Latvia and Lithuania plans to send U.S.-made anti-tank and anti-aircraft missiles to Ukraine, a move that the United States fully endorsed Saturday amid Kyiv's escalating tensions with Russia.