How to explore the history of the 1919 Winnipeg General Strike 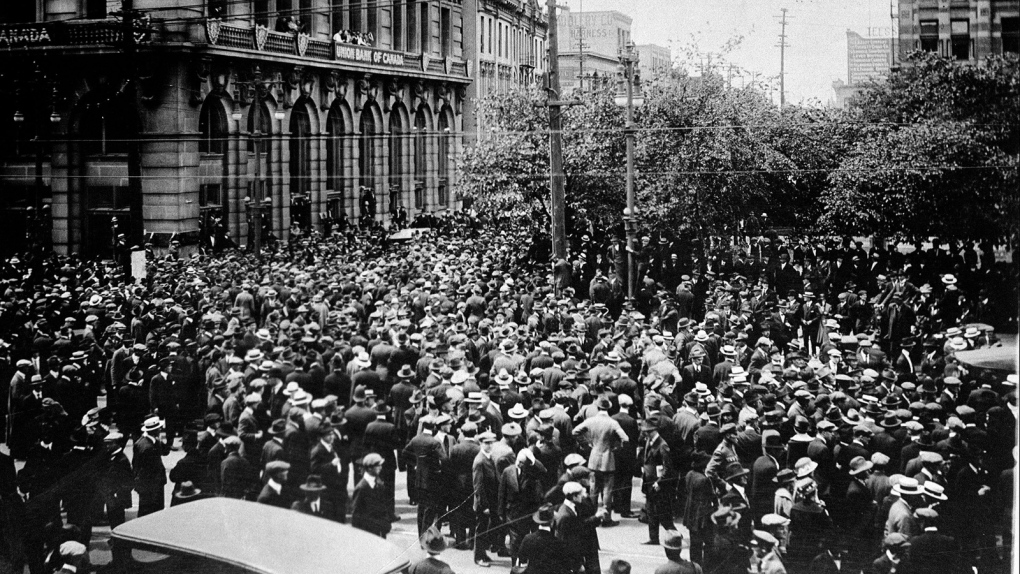 The 100th anniversary of what’s been referred to as the most well-known general strike in Canada and a key moment in both the history of Winnipeg and the Canadian labour movement is just around the corner.

The Winnipeg General Strike began on May 15, 1919 and lasted until June 25. During that time between 25,000 and 35,000 people in Winnipeg walked off the job, sympathy strikes were held across the country, leaders were arrested and tensions came to a head on Bloody Saturday, when protestors clashed with police in a confrontation that led to the deaths of two men and injuries for another 30 people.

“It was an important part of making Winnipeg what it is today,” said Jim Naylor, professor of history at Brandon University. “It was an event really of national, international importance. A strike of 35,000 workers, six weeks long, about half the families in Winnipeg had a member out on strike for that period of time.

To learn more about the Winnipeg General Strike, you can head to a number of Winnipeg attractions, take part in tours and special events, or explore its history online.

Attractions where you can learn about the Winnipeg General Strike

The Manitoba Museum has taken its Urban Gallery back in time for the ‘Strike 1919: Divided City’ exhibition. The gallery, originally created as a window into what Winnipeg was like in 1920, has been transformed with digital projections of strike scenes, strike artifacts, photographs and archival interviews with people who took part in the action, along with audio depicting the discussions Winnipeggers were having in 1919 that puts museum goers at “the epicenter of a city divided.”

The Costume Museum of Manitoba and the Winnipeg Police Museum have partnered with Dalnavert on the ‘Strike 1919: Our Cause is Just’ exhibition, on until Sept. 29 during Dalnavert’s regular hours.

The exhibit at the downtown museum and former home of Sir Hugh John McDonald, who served as police magistrate and opposed the Winnipeg General Strike, will explore issues such as “justice, authority, violence, and how we can change the world” and will include artifacts, period clothing and items from the strike. Admission is free.

‘Unbreakable: the Spirit of the Strike’ is an exhibit that takes visitors through key events in the lead up to the strike, the six weeks it lasted and the aftermath, through photos, newspapers, publications and artifacts that are from the U of M’s archives or borrowed.

The exhibit is located in the archives and special collections section of the Elizabeth Dafoe Library and open from 8:30 a.m. to 4:30 p.m. weekdays until Sept. 30.

The U of M is also mounting a digital exhibit made possible by contributions from a number of collaborators. Its official launch is scheduled for May 15.

While many of the Winnipeg Public Library’s books about the Winnipeg General Strike are currently out on loan due to the anniversary, reference copies are always available to read at the library, along with a collection of rare books and artifacts the library has put together.

“We have rare titles in the local history room that don’t circulate, but that people can always consult about the history of the strike,” said Louis-Philippe Bujold, the librarian in charge of the local history room at the Millennium Library, who said they also have historical photos and artifacts on loan from the Manitoba Federation of Labour.

A display of archival photo reproductions, information and artifacts curated by library staff is also on display on the main floor of the Millennium Library until the end of May.

Bujold said people can also explore clippings of newspaper stories from the time, written from a range of perspectives.

“Most of what you’d call mainstream newspapers at the time were anti-strike, but there were also labour newspapers that were published,” he said.

The newspaper resources can be found on the third floor of the Millennium Library at micromedia services, Bujold said, and staff have already set aside a collection of strike-related clippings.

The library is also holding a talk with author and historian Michael Dupuis on May 14 (see events section below for details.)

The now-iconic Winnipeg museum located at The Forks opened in 2014 with an exhibit in its Canadian Journeys gallery about the 1919 Winnipeg General Strike that includes a video, artifacts and images, which is covered by the regular cost of admission.

A spokesperson said this summer the CMHR will begin offering a labour rights themed tour and in November will open a new exhibit about how labour organizations have impacted contemporary life, with improvements to worker safety, for example.

Historians, scholars, union leaders and social activists will present on and discuss the Winnipeg General Strike and its impact in the past and present day, including examinations of poverty, divides in labour organization, and the role of organized labour in responding to social issues.

“It really brings together a lot of academics who have worked on the history of the strike, labour studies scholars who think about these sorts of issues, and the labour movement, which is in some ways looking to the past in order to think about ways of building to the future.”

Registration for the conference is still available and some conference events and discussions are open to the public.

An exclusive addition to its seasonal walking tours for 2019, the Exchange District BIZ is offering an immersive walking tour focussing on life in Winnipeg in the years leading up to 1919, the events of the strike and its aftermath. The tour is 90 minutes long and available by appointment. A shorter Winnipeg General Strike Tour that runs 60 minutes is also offered, along with others from the BIZ that touch on the strike.

Information for how to book walking tours through the Exchange District BIZ, which cost $8 to $10 and run until Aug. 31, is available online.

Author and historian Michael Dupuis will discuss what led up to the strike, how it unfolded and its impacts at the Henderson Library on May 14, from 6:30 p.m. to 8 p.m.

This three-hour tour will wind its way through the North End, to the residential area south of the Assiniboine and then to the Exchange District and Victoria Park, exploring “social and economic conditions that led to and followed the strike.” The cost is $15 and spots can be arranged by email.

Visit grave sites of some of the key union players in the Winnipeg General Strike and learn more about its history. There is no fee for the tours, which begin at noon and take about 90 minutes. You can find more information online.

‘Strike! The Musical’ on stage at Rainbow Stage, select dates from June 18 – July 5.

You can catch Danny Schur’s musical based on the events of the Winnipeg General Strike this summer at Rainbow Stage. Tickets cost between $55 and $65 and are available online.

Other events taking place to commemorate the Winnipeg General Strike

Manitoba labour organizations are holding a number of events to mark the anniversary of the strike, including a social, a gala dinner, a parade and concerts. You can find more information from the Manitoba Federation of Labour.