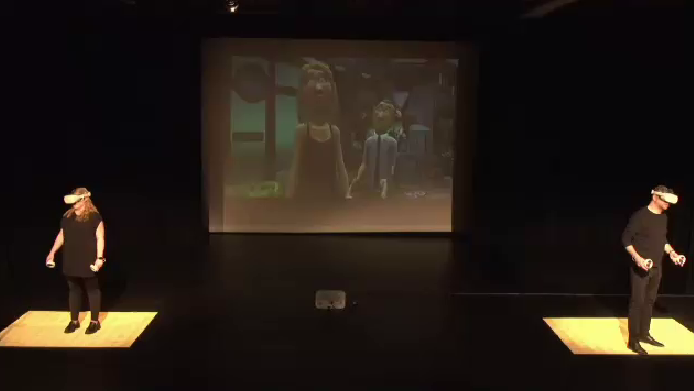 A new festival that connects art with technology wrapped up on Sunday.

The five-day In/On/Out Festival, as the name suggests, incorporated performances and installations inside, outside and online.

It began as an idea from Timmins, Ontario transplant Stephanie Morin-Robert – who served as the festival’s artistic director.

She wanted to create opportunities for artists in the community and, with the help of funding from Canada Heritage, the festival was born.

“I was new to the community so I thought this would be a great way to meet people and to connect together with organizations with like-minded goals,’ said Morin-Robert.

Morin-Robert said the pandemic forced many artists to incorporate technology into their performances and the festival allowed those artists to showcase their talents, including some for the first time.

“I feel like everybody in the festival has a hybrid practice in some way. The use of technology has been huge because it allows people to experience things no matter where they are in the world,” said Morin-Robert.

As an example, Morin-Robert used a show that incorporated virtual reality, improv and audience interaction while being live-streamed.

“All those different angles and elements really bring people together that wouldn’t be able to get together in normal life.”

As part of the festival, many Exchange District buildings were lit up as part of an outdoor projection exhibition called “Reframe”.

People could scan the QR code from each of the seven buildings that featured lighting to hear the noises the artists connected with the projections.

With positive feedback from the festival’s first edition, plans are already under for one next year.

Among other things, Morin-Robert hopes it will feature more bilingual programming.

Former Russian president Dmitry Medvedev has said the supply of more advanced U.S. weaponry to Ukraine will only trigger more retaliatory strikes from Russia, up to the extent of Russia's nuclear doctrine.

Indian police have arrested more than 2,000 men in a crackdown on illegal child marriages involving girls under the age of 18 in a northeastern state, officials said Saturday.