WINNIPEG -- Searching and scanning now for close to a year, the security measures at Millennium Library are still the source of great debate.

The security system was implemented last February following a rise in the number of incidents the city said were serious, including threats, assaults, harassment, verbal abuse, and the discovery of weapons in and around the library.

The use of bag searches and wand metal detectors at libraries appears to be rare in Canada. CTV News reached out to libraries in nine major cities across the country, eight of which responded that they do no search patrons or use metal detectors.

The goal of the beefed-up security in Winnipeg: protect patrons and staff. City data obtained by CTV News show the new security measures may be working, as overall incidents have dropped.

The data show the number of incidents increased over six years, reaching a record high number of 559 in 2018. But those numbers dropped to 301 in 2019, following the security implementation. 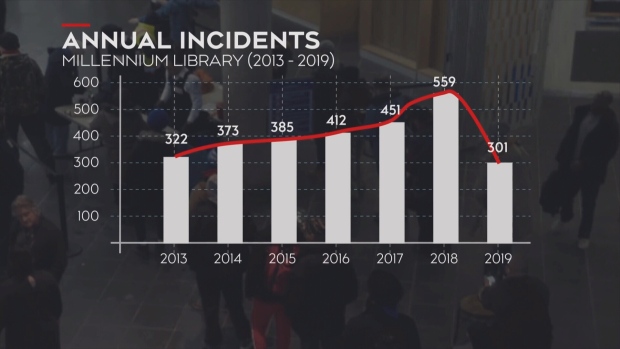 "I think that a lot of (patrons) feel that it is unfortunate that we need these levels of security in place, but at the end of the day the workers and patrons deserve to work in a safe environment," said Gord Delbridge, the president of the CUPE local 500 union.

"It was getting to the point where some members were scared to show up at work. When we had a meeting with Millennium Library workers, some were breaking down in tears."

Millennium For All, a grassroots group opposed to the security, said the airport-like screening measures are having a "devastating" impact on attendance.

And the stats seem to back that up.

In the three years before the security system was introduced, attendance numbers totalled at more than 800,000 visits per year. In 2019, attendance fell to around 609,000. 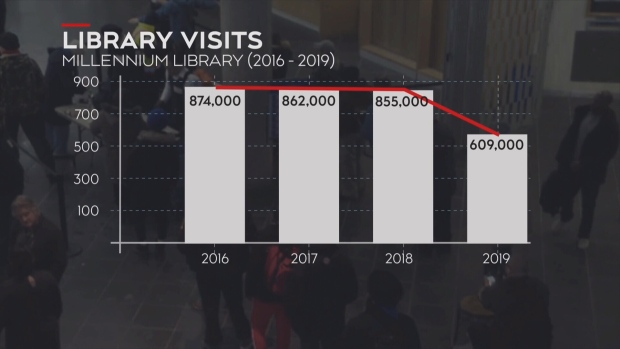 Patrons at the library tell CTV News they aren't surprised by the drop in visits.

"You want to read a book, you want to access information, you might be discouraged from coming," said Allan Kalynchuk, a former library patron. "I don't agree with it. I feel it's intrusive and as a matter of personal opinion I won't go to this library."

Millennium For All is calling on the city to stop the security screenings and look at other options to make the library safer, such as investing in more services or boosting staff numbers.

It's also exploring how it can replace the current security measures due to the backlash.