'It's pitch black!': Air Canada passenger says she was abandoned inside locked plane

A woman from St. Thomas, Ont. says she woke up inside an Air Canada flight that was left parked for the night at Toronto Pearson International Airport.

Tiffani Louise O’Brien said she was on Air Canada Flight 1799, leaving Quebec City for Toronto on June 9, when she fell asleep and woke up inside the aircraft in complete darkness. She said she was rescued after several attempts to signal airport officials for help.

"My phone had several messages that I missed because I told Dee I’d text her when I land,” she said speaking about her friend. 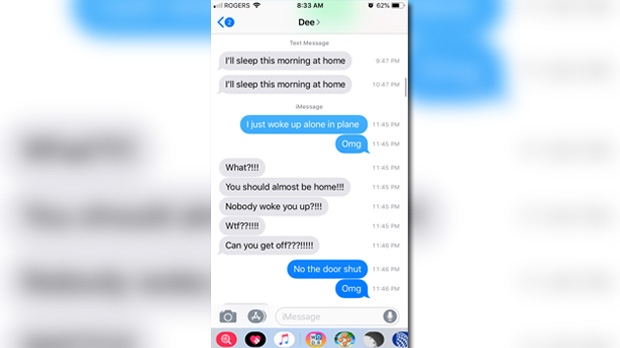 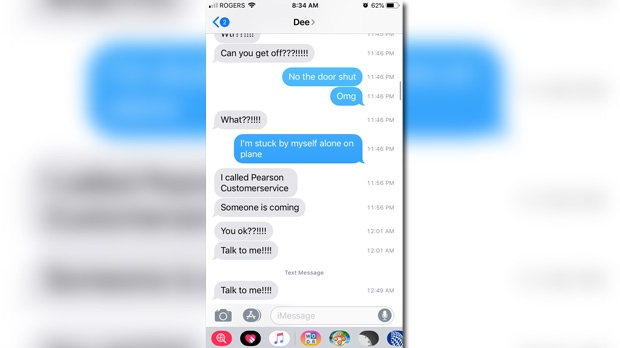 She then proceeded to FaceTime her friend but said her phone died during the conversation.

O’Brien’s friend, Deanna Dale,  was with her in Quebec City and dropped O'Brien off at the airport.

“I told her ‘Just text me when you’re landed or before you get home,’” Dale said.

Dale said it was around 11:45 p.m when she received a message from O’Brien saying she woke up and was alone on the plane.

Dale said she asked O'Brien if she could get off the plane, but O'Brien replied that she was locked in the aircraft.

Dale said she then received a FaceTime call from O’Brien but the call ended quickly. Dale said she tried several times to call her back and then contacted Pearson Airport.

“I said ‘My friend is trapped on the airplane, in the dark, locked in and she just woke up. I need someone to go and get her.’”

A panicked O’Brien said she reached the cockpit through the dark and found a flashlight and that she could see Pearson Airport from a distance.

“I was trying to signal for help,” she said.

O’Brien said she was found by airport officials and escorted back, before she hurried out of the facility and drove home.

She said the experience is lingering in her mind.

A spokesperson for Air Canada told CTV News the company is reviewing the matter.

The airline said in a statement: “We have followed up with the customer and remain in contact with her.”

Air Canada did not provide any further details.