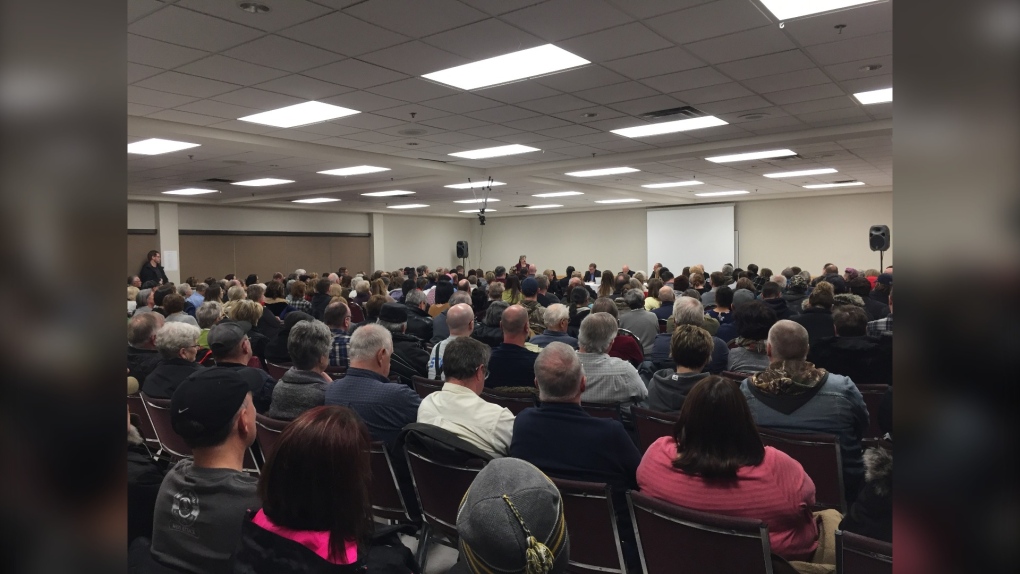 DAUPHIN -- Despite hundreds of Dauphin residents pouring into a town hall meeting and calling for the province to reverse its decision to close the Dauphin Correctional Centre, the decision is moving forward.

It was standing room only as an estimated 500 people squeezed into the Parkland Recreation Complex in Dauphin, Manitoba on Monday night.

Organizers of the town hall meeting had to open two overflow rooms to accommodate the droves of concerned residents who came to the meeting looking for answers as to why the province is closing down the jail.

The jail, which currently employs 80 people and is one of the largest employers in Dauphin, is set to be closed down by May. For those working at the jail, the province has said its goal is to provide other employment options if possible.

Justice Minister Cliff Cullen did not attend the meeting, but sent Dave Wright, the deputy minister of justice. Wright said while many of the residents’ concerns were heard, the decision to close the jail is moving forward.

“The decision has been made.” Wright said. “From my understanding we will be moving towards this decision.”

Wright assured residents there will be jobs for employees of the jail in Dauphin within the correctional industry.

“We will be working through with the union and our goal is to offer assistance to people who are relocating,” he said.

CLOSURE HAS RIPPLE EFFECT IN THE COMMUNITY

“It was complete devastation to the people that are working there and just a wide range of emotions from disbelief.”

Gesiel said the decision to close the jail will have a ripple effect throughout the community.

At Monday’s meeting, residents heard how the effects of the jail’s closure will be far-reaching in the community.

A spokesperson from the Mountain View School Division estimated 46 students in the area have at least one parent working at the Dauphin jail. Losing those students would also result in the loss of more than three teaching positions, the spokesperson said.

The executive director of the Dauphin Chambers of Commerce described how the closure of the jail would cost $10 million to the economy.

“It showed me (the government) is totally unprepared for any repercussions of their decision, both economically to our region and to the families that are being affected,” Dauphin Mayor Allen Dowhan told CTV News.

“It’s going to devastate us.”

Dauphin residents have been calling for the province to reverse its decision to close the jail, or build a rehabilitation centre in its place.

Brad Michaleski, the MLA from Dauphin, told residents at the meeting there is no doubt this was a hard decision for the province to make.

He said the Conservative government was elected to fix finances, repair services and grow the economy.

“Our government is making decisions across the province that aren’t always popular,” said Michaleski. “I am okay with this. I’m okay with tough decision making because I know it’s part of successfully building something bigger and better in Manitoba.”

Both Wab Kinew, the leader of the NDP party, and Liberal leader Dougald Lamont attended the meeting and were highly critical of the government’s decision.

Organizers of Monday’s town hall meeting encouraged residents to reach out to their provincial leaders and “flood their contacts with your concerns.”

There is a march and rally planned in the community on Tuesday.