Jets bounce back with win over Ducks 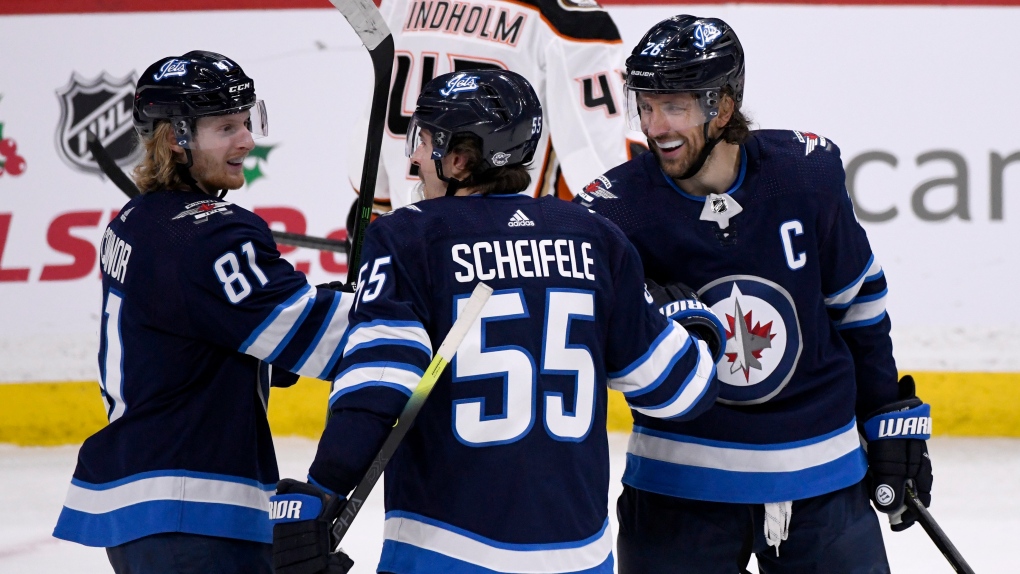 WINNIPEG -- After a 3-2 overtime loss to the Dallas Stars, the Jets responded with a 3-2 win over the Anaheim Ducks on Sunday afternoon. Fitting, as bouncing back is becoming something they’re known for.

Only twice this season have the Winnipeg Jets lost back-to-back games, and both games came within a three game losing streak in mid-October.

“I think we’ve gone on a nice little roll here,” said captain Blake Wheeler. “The way we came back in the Dallas game, you want to win every game, but that one sure doesn’t feel like a loss. If we come out of there 2-0 that’s a deflating one. Just the resiliency of our team, it’s kind of what we’ve built on all year, that’s been our foundation is coming into games and having that compete level every single night.”

Mark Scheifele’s 12th marker of the season opened the scoring with 9:02 left in the first frame, and Jakob Silfverberg tied it up just 32 seconds later. Adam Lowry’s third goal of the season gave Winnipeg the lead in the second period, and once again the Ducks found an equalizer with Devin Shore’s goal midway through the third period.

It would be the Jets’ power-play that would give them the win with under five minutes to play. Wheeler would find Scheifele in the slot, who beat John Gibson for his second goal of the game, and 400th career NHL point.

“You get him in a scoring zone, he’s one of the best there is,” said Wheeler.

“There’s not very many guys in the world that can get that shot off from that spot,” added head coach Paul Maurice.

Connor Hellebuyck made 31-saves for his 15th win of the season, which is tied for the most in the NHL with Washington’s Braden Holtby.

“It was a hard fought game,” said Hellebuyck. “Kind of feeling each other out early. Maybe a little bit loose, but I thought we got better as the game went along. We showed at the end, the grit and the battle in our game, it’s great.”

One of the highlights of the game came from Nikolaj Ehlers, who gave up three inches and over 50 pounds to Ducks’ captain Ryan Getzlaf in a first period fight.

“This is my third fight now. I’m a fighter,” said Ehlers with a grin. “My first period was not something I was happy about. I was trying to skate as much as I could, and try to do the right things, and it didn’t work. So, tried something new.”

“He’s a sick man, really is,” joked Wheeler. “He was going after Jamie Benn a couple nights ago, and now (Getzlaf). We’re going to have to talk to him about that a little bit. Outside of that, what can you say, I mean what a hell of a job by a little guy. That dude’s got some fire in his belly for sure.”

“That was foolish, wasn’t it,” said Maurice of the size mismatch between Ehlers and Getzlaf. “But, god bless him. Don’t do it again. Ever.”

With the win, the Jets moved into third place in the Central Division with 38 points (18-10-2). They begin a home-and-home set with the Detroit Red Wings on Tuesday night at Bell MTS Place.