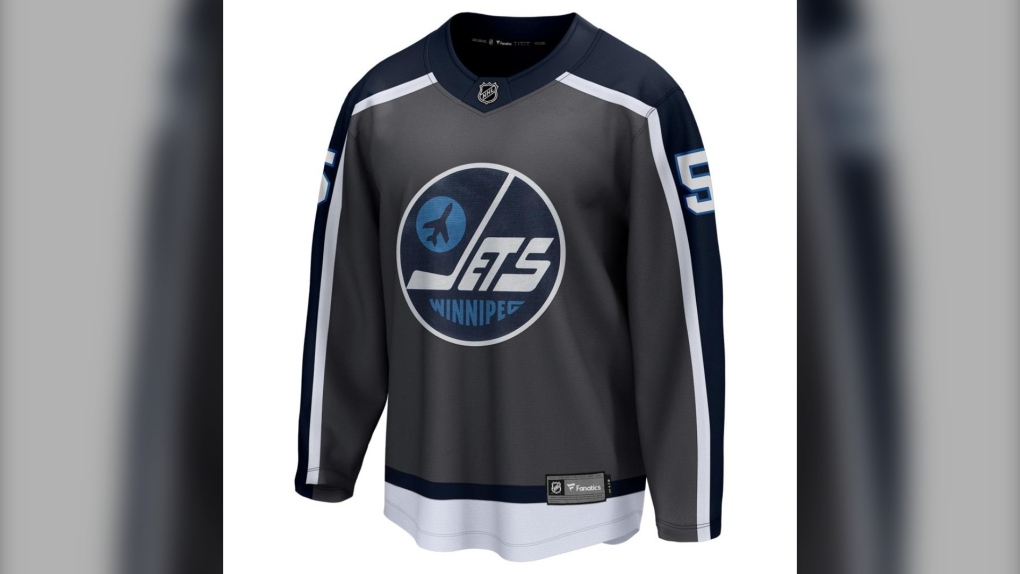 The NHL has released its new Reverse Retro jerseys for all 31 teams, including a modern twist on a classic Winnipeg Jets look. (Source: TrueNorthShop.com)

WINNIPEG -- The NHL has released its new Reverse Retro jerseys for all 31 teams, including a modern twist on a classic Winnipeg Jets look.

While honouring the team’s inaugural NHL season in 1979, the newest sweater combines the team’s look from the 1980s with the current colourway, with the iconic logo once worn by Winnipeg greats like Dale Hawerchuk’s, tweaked with a light blue jet and “Winnipeg” lettering instead of the classic red, on what the team is calling a “fighter grey” jersey.

It’s part of the NHL’s Reverse Retro program with its jersey supplier, Adidas, and marks the first time the league has an alternate jersey program involving all of its 31 teams.

"Hockey fans love retro jerseys and Reverse Retro is a great opportunity for Adidas to work closely with the NHL and all 31 teams to bring back a design from a meaningful point in team history with a unique twist," said Dan Near, senior director at Adidas Hockey in a media release, Monday.

Paul Lukas is a freelance journalist and founder of uni-watch.com based in Brooklyn, New York, and has been covering athletic uniform design and aesthetics for more than 20 years; specifically focusing on how it looks and performs on the field of play.

He says, as can be expected with a league-wide rollout of a jersey program, the NHL’s Reverse Retro initiative is hit and miss.

“In general, these types of projects usually start with a clever idea and then it works really well for some teams, and not as well for others because the clever idea doesn’t apply as well to certain teams because of their colour schemes or their history, or whatever it might be,” said Lukas, “sometimes it’s hard to have a ‘one size fits all’ approach.”

Lukas points to teams like the Toronto Maple Leafs and Detroit Red Wings, who have one colour, plus white, with no alternative colour, and the Vegas Golden Knights whose short history doesn’t lend any old logos or uniforms to work with as some of the likely challenges designers faced while trying to develop a new, yet nostalgic alternate jersey.

However, when it comes to Winnipeg, despite his personal distaste for grey uniforms in sports other than the traditional road uniforms in baseball, the Jets final look caught him by surprise.

“The more I looked at it, the more I kind of liked the Jets one.” he said,

“I always liked the original, that WHA Jets original design and I’m actually surprised at how well those two tones of blue, and the white, and that dark grey to sort of charcoal grey, I think it works pretty well.”

With the initial release from the NHL and Adidas on Monday morning showing only the jerseys and not the full uniforms, Lukas says it’s hard to determine just how good these designs are until he sees them on the ice, saying he doesn’t consider marketing or sales of a jersey when evaluating it.

Many, including Jets fans, took to social media to express their love, or hate for the third jersey, making “Reverse Retro” one of the top trends on Twitter for most of Monday.

Time will tell whether the new league-wide jersey program is a hit with fans, as the jerseys don’t officially go on sale until December, and it will likely garner renewed interest when teams start wearing them on ice, as the NHL says each team will wear the jersey in multiple games next season.