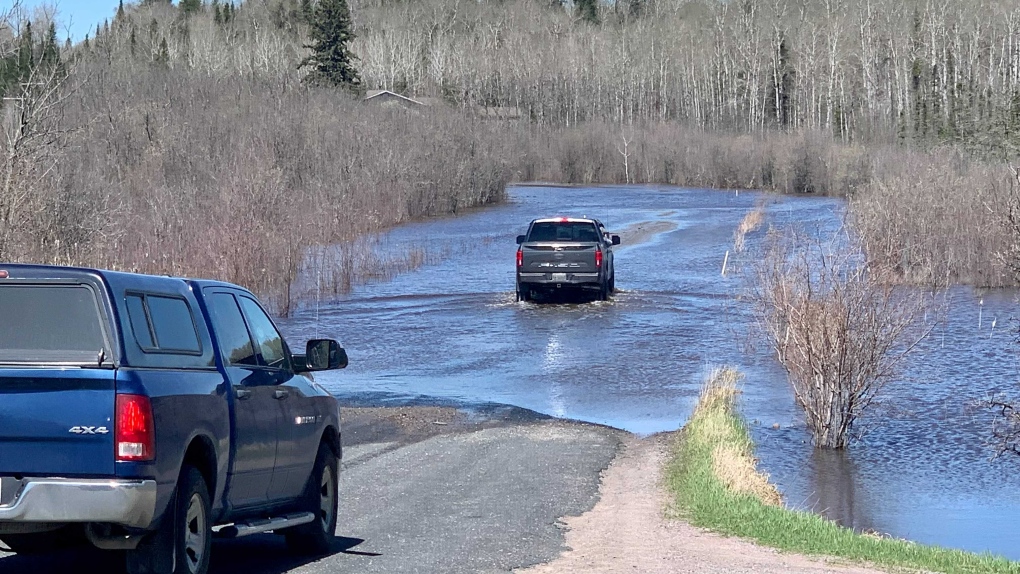 Vehicles travel down a flooded road in Kenora on May 13, 2022 (CTV News Photo Scott Andersson)

Residents in Kenora, Ont., were told to watch for the possibility of more flooding on Monday as water levels were projected to rise in the northwestern Ontario city that issued an evacuation order for certain areas last week.

Kenora Fire Chief Kent Readman said city staff were out monitoring road conditions and water levels, while contractors were raising local roads. The teams were working with various partners including the Ontario government and provincial police to keep everything "as controlled and organized" as possible.

"(We) are expecting water levels to continue to rise through Lake of the Woods and the Winnipeg River systems, and then that will affect other water systems in our area," Readman said in a phone interview on Monday.

"So at this point, it doesn't look like there's any real end in sight for this, unfortunately."

The rising water levels in the area prompted the city to issue an evacuation order on Friday. On Sunday it advised anyone with residences north of the Kenora bypass route to monitor their homes and watch for the possibility of flooding in their areas.

Readman said about 440 properties have had to be evacuated so far, with the total number of people having to leave their homes estimated to be in the few hundreds.

An evacuation centre has been set up in the community, but nobody had accessed it by Monday afternoon as the majority of people were staying with friends and families, in hotels, or sheltering in place at their homes, Readman said.

"I think a lot of people were somewhat prepared for this and have done a really good job of looking after themselves and their families," he said.

"I know there's some anxiety and some high stress levels out there, but overall, there's been a great group effort from a lot of different people and our residents are doing awesome, as well as they can, in a situation like this. So just working our way through it."

He noted that residents who evacuated from the evacuation order zone will not be able to return to their homes until there are "significant drops" in water levels and "the roads are safe for travel."

For now, he said, that's "up in the air," since some areas saw water levels increase by about 38 centimetres in a 24-hour period over the weekend.

"It's ranging between, some roads just getting a little bit of water overtop them, to our uppermost of (roughly 76 to 78 centimetres) at this point of water laying on top," he said.

In a notice Monday afternoon, the City of Kenora said contractors would begin work to raise road surfaces "in anticipation of rising water levels" on certain routes.

"Local access for residents will be maintained, however, delays are expected while work occurs," the city said.

Numerous First Nations and other communities in northern Ontario have also been affected by flooding.

"The province will continue to collaborate closely with affected First Nation communities and municipalities, the federal government, and the NGO sector to ensure that all necessary resources are deployed to protect people impacted by flooding," Ross said in a written statement.

In Kenora, the city was encouraging residents to protect their homes with sandbags in areas not already evacuated and to act quickly to ensure they continue to have road access.

"Be aware that the water can rise really quickly. Like I said, we've seen (about 38 centimetres) of rise in one area basically overnight, so conditions can quickly change."

This report by The Canadian Press was first published May 16, 2022.

Emergency room delays to continue for 'quite some time,' doctor warns

An emergency room physician is urging governments to address the country’s shortfall of health-care workers in light of the recent temporary shutdowns of emergency departments and the staffing downsizing at others.

The family of a woman who was set on fire while on a Toronto bus in a random attack last month has released a short statement following her death.