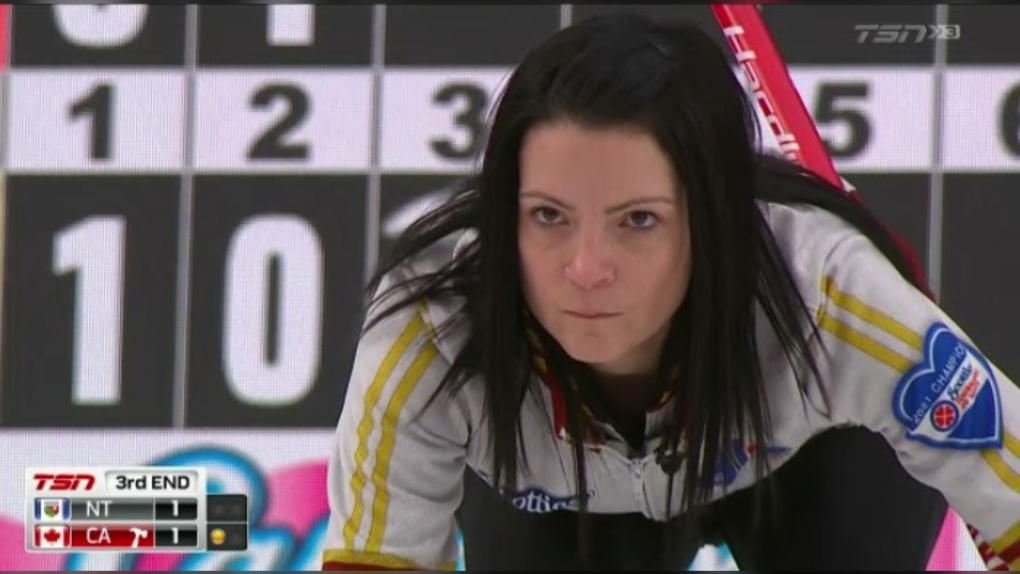 Ontario and Canada were the only teams among 18 without a loss Monday at the Scotties Tournament of Hearts.

CALGARY -- If there's an upside to Kerri Einarson not having a women's world curling championship to play in this month, it's the chance to win another Canadian championship.

The March 18-25 tournament will be the third of four Curling Canada events held in a spectator-free, controlled environment in Calgary to prevent the spread of the COVID-19 virus.

While Einarson and company would have preferred representing Canada on the world stage March 20-28 in Schaffhausen, Switzerland, mixed doubles offers the chance to at least keep curling.

When the World Curling Federation called off the women's championship Feb. 8, Einarson said she sent Gushue a tongue-in-cheek text saying "well, good news, I guess the worlds is cancelled so I guess I'm playing mixed doubles."

Gushue and several other men curling in the national championship, starting Friday at WinSport's Markin MacPhail Centre, will stay on in Calgary for $150,000 Home Hardware Mixed Doubles Curling Championship.

The top 12 teams emerging from five pools advance to playoffs.

The winner earns $50,000 in prize money and represents Canada in the 2021 world mixed doubles championship, if there is one. The World Curling Federation has yet to announce a date and location.

The world championship would determine seven of the 10 countries competing in mixed doubles in the 2022 Winter Olympics in Beijing.

The pandemic wiping out the majority of the curling season posed qualification challenges for mixed doubles as it did for the Scotties Tournament of Hearts and Tim Hortons Brier.

Fourteen pairs are provincial or territorial champions and another 14 gained entry via Curling Canada's mixed doubles rankings based on their results between March 2019 and March 2020.

The latter group of 14 had to play a minimum of two mixed doubles events during that time frame.

The seven other teams in the field didn't compete this season because of the pandemic, but had declared to Curling Canada their intention to curl mixed doubles in 2020-21.

They qualified via a ranking system based on each athlete's top three results with their four-player teams, combined with their partner's, in 2019-20.

Gushue and Einarson were among those seven whose ranking under that criteria placed them fifth.

Curling Canada wants to keep mixed doubles options open for the country's top curlers who spend the majority of their competitive seasons with their four-player teams.

Morris and Lawes had played only a handful of games together before winning Olympic gold in 2018.

Curling Canada responded that they didn't play mixed doubles together in the 2019-20 time frame, nor did they rank high enough to be among the seven. Carey and Hodgson ranked 10th.

This report by The Canadian Press was first published March 2, 2021.