WINNIPEG -- No Hollywood magic was required to make it cold on the Ile des Chenes set of a new Liam Neeson movie called "The Ice Road." Mother nature took care of that.

"When it's windy, it's very very tough," said the movie’s producer Al Corley.

The cold weather plays right into the Northern Canadian setting of the action film, starring Liam Neeson from the Taken franchise, and Laurence Fishburne from the Matrix and John Wick series.

In the film, Neeson’s character must race to free some trapped miners.

"The only way to get the equipment up to save the miners is to take it on the ice roads with three 18-wheelers,” said producer Bart Rosenblatt.

In Ile des Chenes, the crew used some practical effects to create an area that looks like a real ice road.

"We laid water down, and then actually even though it looks like it's just ice, it's all been painted with ice paint," said Corley.

However, earlier in the shooting schedule, the crew built a real ice road on Lake Winnipeg near Gimli.

"I know that Liam Neeson and Laurence Fishburne all thought, and all of us thought it was really otherworldly being out on the ice ."

There are still upcoming shoots in the City of Winnipeg. The Ice Road is expected to wrap production by the end of March. 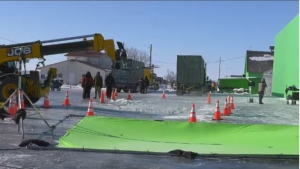 On the set of Liam Neeson's new movie