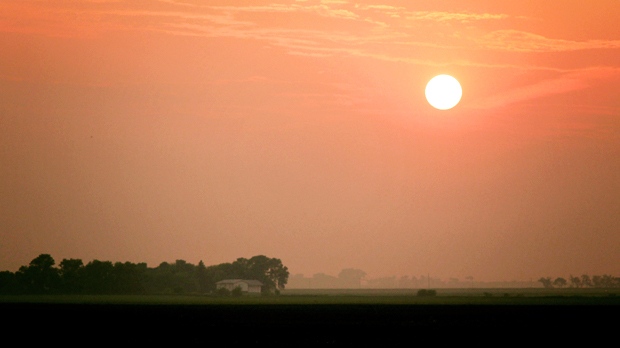 The entire province of Manitoba is under hazy skies as smoke from the BC Wildfires comes east. (File)

The entire province of Manitoba is under somewhat hazy skies and Environment Canada has issued an air quality alert.

Smoke originated from BC’s 600-plus wildfires burning is making it’s way out east, with Alberta and Saskatchewan issusing similar alerts.

The haze is better in some areas, but Environment Canada is warning of reduced visibility and air quality.

A shift in the wind pattern is expected to bring more dense smoke throughout western Manitoba which will continue into the southern parts later tonight.

Air quality is expected to get worse as smoke builds up with visibility being affected.

On Sunday clearer air should be coming down from the north throughout the southern regions of the province clearing out most of the smoke by Sunday afternoon.

Due to the poor weather, residents could experience symptoms like increased coughing, throat irritation, headaches or shortness of breath. Anyone suffering from cardio vascular or lung problems as well as kids and senior citizens are facing increased risk.

Environment Canada is advising Manitobans to: