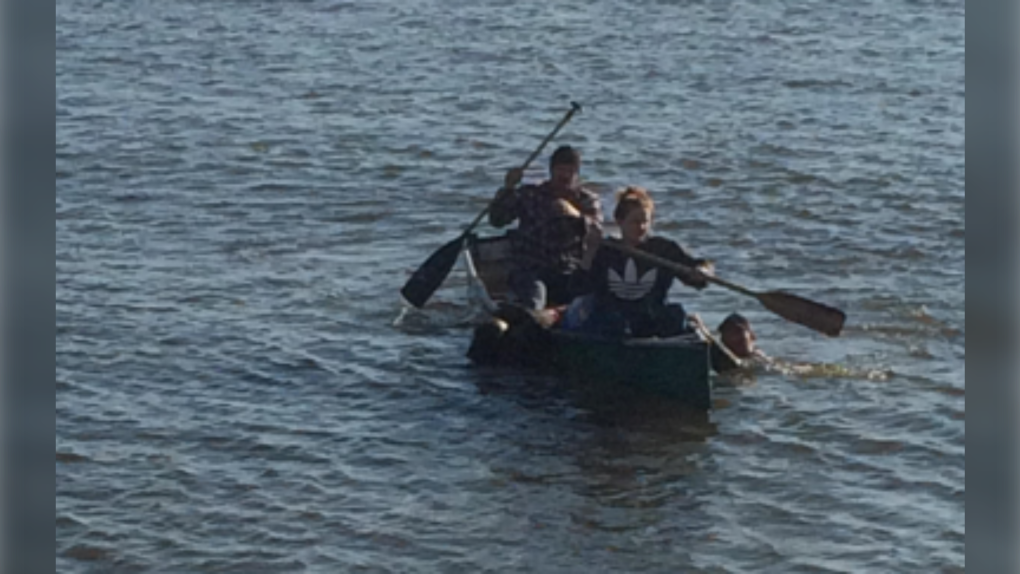 Susan Skinner took a picture of her son Matthew and his girlfriend Kaela rescuing two men after their boat sank on Lake Winnipeg. Three men were rescued by the family in total.

WINNIPEG -- A Manitoba family's Monday night dinner went from a relaxing evening to a water rescue at Balsam Harbour.

Susan Skinner said she was sitting down to eat with her husband Ken, her son Matthew and his girlfriend Kaela at their cabin when they noticed there was a boat on Lake Winnipeg.

"My dining table looks right out over the lake and we were looking at the lake and surprised to see a boat out there because there is still ice on the lake," said Skinner. "We said 'Oh golly' it's early to have a boat out, it's the first one we have seen this season."

Skinner said they were watching the boat and they had noticed that it was getting lower in the water.

Skinner said when they saw it sink, her family jumped right into action. She said her husband ran and got the canoe and her son and his girlfriend grabbed oars and life jackets and went into the water to rescue the men in the boat.

There were three men in the boat, Skinner said one of them was able to make it close to the shore where her husband pulled him in, but the other two were stuck out further.

"Matt and Kaela, bless their hearts, in the canoe went and got them. One was in pretty desperate shape, yelling 'save me'. They got him sort of hungover one side of the canoe and balanced it leaning the other way."

She added the other man was floating on something and that Matt and Kaela grabbed him and put him on the other side of the canoe.

They were able to get the men inside. Skinner said they started a warm shower for the first man who was rescued and then wrapped him in towels and blankets so he could relax.

She added that the other two men were vomiting and she had called 911 to have someone check on them.

Skinner said there were about eight first responders that showed up and the men stayed at their house until they stabilized.

She said that they hadn't thought about protecting themselves from COVID-19 until they saw the first responders with their gloves and masks on.

"Ken and I decided that maybe we should have our masks on, we hadn't thought about that."

She said despite what is going on in the world with the virus they didn't really have time to be prepared.

"What do you do? Don your mask before you go into the lake. You just do what you have to do."

She said the men were fortunate that someone was there because there aren't too many people up at the lake this time of year.

Skinner said based on where their cabin is, this isn't the first time they have had to help people out, noting that her son was there when a truck went through the ice late last year.

SHOCKED AFTER THE INCIDENT

After the incident had ended Skinner said her family was a little shaken.

"You know what, it is interesting, there are some physiological and psychological things that happen when something as traumatic as that happens to you," said Skinner.

She said she and her husband felt weird for a couple of days but they are doing better now.

After everything, Skinner said she is proud of her family for just stepping in and saving the men.