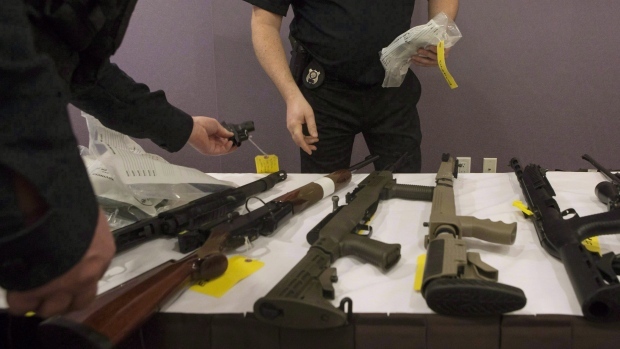 In this file photo, Ontario police officers prepare to bag a firearm in Vaughan, Ont., on February 23, 2017. (THE CANADIAN PRESS/Chris Young)
Winnipeg -

The four provinces in which a majority of those surveyed indicated they believed gun violence was increasing were Quebec at 75 per cent, Ontario at 66 per cent, Nova Scotia at 61 per cent and British Columbia at 52 per cent.

Across the country, rural residents were more likely than their urban counterparts to indicate they saw gun violence as staying steady. Among rural residents, 62 per cent fell into that category versus 49 per cent in urban areas.

In Winnipeg, 39 per cent of respondents said they believed gun violence was more common while 56 per cent saw it as neither increasing nor decreasing.

Regarding gun control, a majority of respondents saw effective handgun control as being achievable only with national regulations. That figure ranged from 47 per cent of Saskatchewan residents to 71 per cent in B.C. and Nova Scotia. In December, the federal government announced a $1-billion fund to assist provinces if those jurisdictions wanted to ban handguns. The fund may also be accessible to municipalities, though a final decision on that has yet to be made.

Two-thirds of Canadians are opposed to the federal government’s current position of leaving it to the provinces – which some have criticized because they believe it will result in an ineffective “patchwork” of rules and regulations. Twenty-three per cent disagree and believe provinces should have the flexibility to decide their own laws.

The latter group is larger in Alberta at 34 per cent and Saskatchewan at 41 per cent, the only province where support of national rules falls below half. Elsewhere in the country, at least two-thirds believe federal rules are preferable to provincial ones.

Angus Reid said the margin of error for the survey is plus/minus two percentage points.

A Member of Parliament from rural Alberta went live on Facebook Friday to celebrate a United States Supreme Court vote to end constitutional protections for abortion.

Two people were killed and around 10 wounded on Saturday in a shooting at a nightclub in Norway's capital Oslo, Norwegian police said.