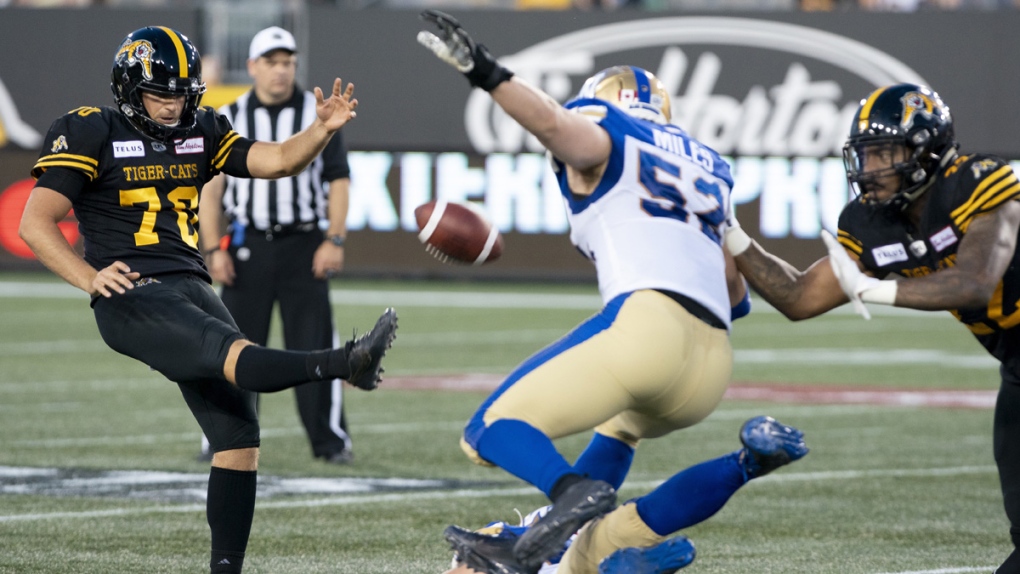 HAMILTON -- Dane Evans helped the Hamilton Tiger-Cats knock the Winnipeg Blue Bombers from the ranks of the unbeaten, but at a potentially huge cost.

Still, Hamilton converted six Winnipeg turnovers (three interceptions, two fumbles, downs) into 14 points to earn its fourth straight home win. And the Ticats' defence was without linebacker Simoni, its leading tackle who was serving the first of a two-game suspension for hitting Saskatchewan's Zach Collaros in the head in the season opener.

And time is of the essence as Hamilton (5-1) visits the Saskatchewan Roughriders on Thursday night.

"Jeremiah doesn't need practice if it's something he can get through," Ticats head coach Orlondo Steinauer said. "If it's something different then Dane has to step up, that's the way it is.

Evans finished 13-of-25 passing for 94 yards with an interception and ran twice for eight yards. The third-year pro said he wasn't phased going into the contest because he prepares weekly as if he's the starter.

"(This) is huge. We had almost all of the adversity you could have . . . we battled through it and were able to win the game and that's all that matters in this profession."

Evans said if Masoli's injury is serious, he's prepared to be Hamilton's starter.

"Like I said, you've got to prepare every week," he said. "I've been preparing every week like it's my team even though it's clearly Jeremiah's.

Hamilton's rushing TDs were the first allowed this season by Winnipeg (5-1). Quarterback Matt Nichols was 29-of-48 passing for 261 yards with one TD and three interceptions, after coming into the contest having thrown just one.

Nichols completed his final 19 passes last week versus Ottawa, a Winnipeg record. But his streak ended with an incompletion on the first attempt before Hamilton's Jumal Rolle picked off Nichols' second throw and returned it 45 yards to set up Evans' one-yard TD run that put Hamilton ahead 14-0 at 6:03 of the first.

Still, Winnipeg made it interesting with Justin Medlock's 18-yard field goal at 12:11 of the fourth to cut Hamilton's lead to 23-15. The Bombers got the ball at their 17-yard line with 57 seconds remaining but turned the ball over on downs on Adrian Tracy's third-down sack at the visitors' 20-yard line with 19 seconds left.

"Our motto is, 'Watch film, make corrections, move on,' " said Winnipeg linebacker Adam Bighill, who had two tackles in his first game back after missing three due to injury. "That will happen (Saturday).

It was the first matchup between Steinauer and Winnipeg coach Mike O'Shea. The two had spent 12 seasons together as teammates and assistant coaches with the Toronto Argonauts, winning Grey Cups as players (2004) and coaches (2012).

Masoli hit Maleek Irons on the two-point convert after Evans's TD. He opened the scoring with a 23-yard TD run at 4:14, the first rushing touchdown allowed by Winnipeg that also marked the first time in five games the Bombers had trailed.

But late in the quarter, Masoli went down hard when his left leg seemed to buckle beneath him on a first-down play. Masoli was able to walk off the field and was replaced by Evans.

After heading to Hamilton's dressing room, Masoli returned before the end of the half wearing shorts and a brace on his left knee. He completed six-of-seven passes for 59 yards with an interception to go with the rushing TD.

Darvin Adams had Winnipeg's touchdown. Justin Medlock booted a convert and two field goals with the other points coming on a safety. But Adams and linebacker Anthony Gaitor were both lost to first-half lower-body injuries.