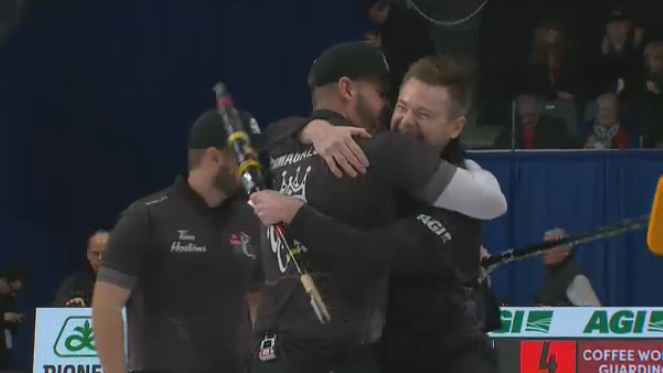 KINGSTON, ON. -- Tied with hammer in the 10th end, McEwen drew the four-foot ring to score one for the victory.

He'll be called Team Wild Card in the 16-team competition, which runs through March 8. The loss means it's one and done for Howard, who is denied an 18th career Brier appearance.

Both teams needed a few ends to find their draw weight on the fresh ice at the Leon's Centre.

McEwen had hammer and blanked the opening end. Howard put some pressure on in the second and McEwen was forced to draw for a single.

McEwen second Derek Samagalski wrecked on a guard in the third end, eventually forcing McEwen to make a double takeout. Howard, from Penetanguishene, Ont., drew for the deuce and a 2-1 lead.

The Ontario crowd was noticeably pro-Howard and the veteran skip seemed to feed off the home energy.

Howard made a nice freeze in the fourth end that forced McEwen to follow suit for one point. In the fifth, Howard missed a thin takeout attempt for three and settled for a single to take a 3-2 lead into the break.

Back-to-back blanks left McEwen with hammer in the eighth end. Howard barely missed a double takeout and the Winnipeg skip drew for a pair.

Howard, who was making his first appearance in the play-in game, settled for one in the ninth.

Canada's Kevin Koe is back as the defending Brier champion. He beat wild-card entry Brendan Bottcher in an all-Alberta final last year in Brandon, Man.

Bottcher is representing the province this time around in a deep field that includes top-ranked Brad Jacobs of Northern Ontario, John Epping of Ontario and Brad Gushue of Newfoundland and Labrador.

The field is divided into two pools of eight teams. The top four teams in each pool at the end of round-robin play Wednesday will advance to the championship round.

The four-team Page Playoffs begin March 7. The semifinal and final are set for March 8.

The Brier winner will represent Canada at the March 28-April 5 world men's curling championship in Glasgow, Scotland and also earn a berth at the Olympic Trials for the 2022 Winter Games.

McEwen and Howard both lost their respective provincial finals.

They qualified for the play-in game thanks to their position in the Canadian rankings. McEwen is ranked fourth in the country and Howard is ninth.

McEwen was Team Wild Card in 2018, the first year the format was introduced.