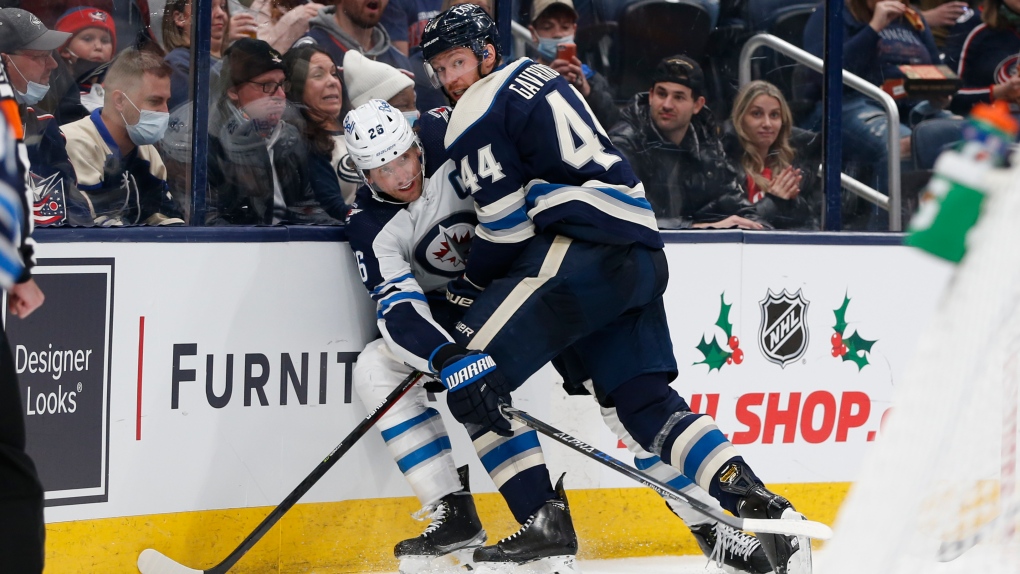 Elvis Merzlikins made 36 saves for his seventh career shutout and the Columbus Blue Jackets blanked Winnipeg 3-0 on Wednesday night to hand the Jets their fourth consecutive defeat.

Gregory Hofmann, Zach Werenski and Andrew Peeke scored for Columbus, which won for the fourth time in five games.

Connor Hellebuyck stopped 29 shots in his first loss in five starts against the Blue Jackets.

Hofmann put Columbus on the board at 15:09 of the first period, taking a left-side pass from Max Domi on the rush and slipping it past Hellebuyck for his second goal of the season.

Domi has four points in his last three games since returning from COVID-19 protocol.

Werenski made it 2-0 with a power-play goal at 6:49 of the second on a shot from the right circle. It was his third goal with the man advantage and fifth of the season, extending his point streak to six games.

Jakub Voracek's primary assist was his 13th this season, most in the NHL. He has 15 assists overall, and he extended his home point streak to five games.

Peeke added an empty-netter at 16:27, assisted by Vladislav Gavrikov and Alexandre Texier, who also extended his home point streak to five games.

Winnipeg is winless in three games against Eastern Conference foes this season.

Jets: At the Minnesota Wild on Friday.