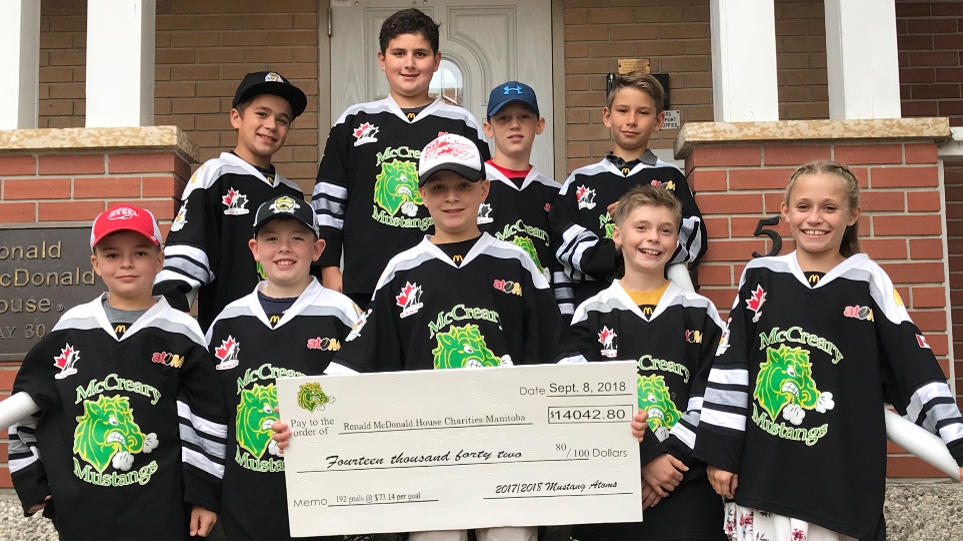 A Manitoba-based minor hockey team is helping families in need one goal at a time.

The McCreary Atom Mustangs raised $14,000 for the Ronald McDonald House Charities Manitoba (RMHCMB), which saw the teammates collecting pledges-per-goal throughout the 2017-2018 season.

“This amazing gift and example of generosity from these young hockey players is truly appreciated,” said Wendy Galagan, CEO of RMHCMB.

“We are incredibly grateful for this wonderful community and team spirit, and inspired by the players’ enthusiasm to give back and support our families.”

During the 14-game season, in which the Mustangs went undefeated, the teammates fundraised in-person, online and by phone. They even had pledges come from as far away as Switzerland.

"I think the success we had was overwhelming for everyone,” said head coach Syd Gower.

"Nobody expected to raise as much money as we did. We sort of thought if we reached $5,000, we would be more than happy, but we more than doubled that, so it's great."

The team is visiting RMHCMB on Saturday to tour the house and prepare a dinner for the families who are staying there.

“It is great to see the members of the McCreary Atom Mustangs team giving back to their community by supporting Ronald McDonald House. Their unselfish commitment to an outstanding cause is not only a reflection of the players involved, but also the leadership that all members of the team and community provided to support this fundraiser. Congratulations to everyone associated with this project,” said Peter Woods, executive director of Hockey Manitoba.