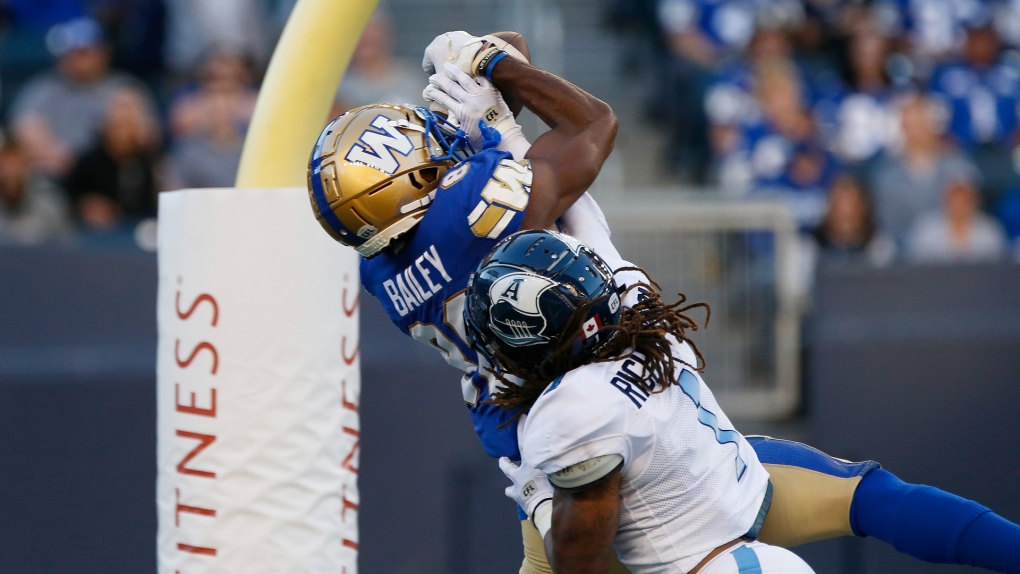 Winnipeg Blue Bombers' Rasheed Bailey (88) makes a catch for a touchdown as Toronto Argonauts' Shaq Richardson defends during the first half of CFL action in Winnipeg Friday, August 13, 2021. (THE CANADIAN PRESS/John Woods)
WINNIPEG -

Sophomore receiver Rasheed Bailey caught his first CFL touchdown and the Winnipeg Blue Bombers didn't let a change in Toronto quarterbacks throw them off on the way to a 20-7 victory over the Argonauts on Friday.

Toronto (1-1) quarterback McLeod Bethel-Thompson started the game, but was replaced by Nick Arbuckle with 4:17 left in the third quarter and the score 10-0 for Winnipeg (2-0).

Arbuckle, who didn't play in the Argos' first game because of a hamstring injury, promptly led Toronto on a seven-play, 75-yard drive that ended with John White's 30-yard touchdown run with 1:11 left in the third.

Winnipeg replied with a Nic Demski touchdown, and then Arbuckle was intercepted by defensive back Deatrick Nichols with four minutes left in the game. That led to a Tyler Crapigna 22-yard field goal with 2:07 remaining.

Arbuckle finished the game completing 10-of-19 pass attempts for 96 yards and one interception. Bethel-Thompson was 10-of-20 for 70 yards.

Crapigna was also good on another 22-yard field goal and two converts.

Toronto kicker Boris Bede hit an upright on a 51-yard field-goal attempt, but made his convert of White's TD.

Collaros threw a 35-yard pass to Bailey in the end zone, who was in tight coverage and came down with the ball at 10:14 of the first quarter.

The Argos hurt themselves with some penalties early in the second quarter, including three in a row that forced a punt. At halftime, Toronto had nine penalties for 67 yards, compared to Winnipeg's three for 35 yards.

Toronto got a spark after forcing Demski to fumble. The ball was recovered by Shaq Richardson and the Argos took over at their own 39-yard line, but the series ended with Bede's dead ball on his field-goal attempt.

Winnipeg responded with a 16-play, 71-yard drive capped off by Crapigna's field goal with no time left of the clock.

Argos defensive back Jamal Peters intercepted Collaros in the end zone midway through the third quarter, jumping up in front of intended receiver Kenny Lawler. The gift ended with a punt after White ran for two yards and Bethel-Thompson threw an incomplete pass to DaVaris Daniels.

Arbuckle was sent in to replace him for the next series and marched the Argos down the field for White's TD at 13:49.

White's good fortune soon turned when he was forced to fumble and Nichols recovered the ball at Toronto's 36-yard line.

The turnover ended with Demski's 15-yard TD catch in the corner of the end zone to up Winnipeg's lead to 17-7 at 3:07 of the fourth quarter. The win was sealed with Crapigna's field goal at 12:53.

Arbuckle fumbled with 46 seconds left in the game after he got the Argos down to Winnipeg's 25-yard line.

White finished with 12 carries for 111 yards.

This report by The Canadian Press was first published August 13, 2021.