One Manitoba university is operating a near-net-zero energy greenhouse on one of its campuses that could one day help address food insecurity in northern Manitoba.

The University College of the North (UCN) said it built the greenhouse on its campus in The Pas to improve food sovereignty, community health, and student learning opportunities.

Katrin Stedronsky, assistant professor in the Faculty of Arts, Business and Science at UCN, said it was designed “strictly for proof of concept of year-round production of produce with sustainability at the centre of it.”

The facility’s main heat reservoir is Biofibre blocks, which absorb light energy. The blocks were built based on a Canadian design and are made from Canadian-sourced hemp. They were also designed to capitalize on heat retention.

“[The greenhouse was designed] so we can have that year-round production of produce in northern communities where they don’t necessarily have availability for fresh produce as readily,” Stedronsky said.

“A lot of that produce is shipped in from the south.”

She noted the transport of produce and perishables into northern regions often ends up costing community members a lot of money.

“Having this greenhouse in place would help reduce that cost,” Stedronsky said, noting the UCN greenhouse is just a test run. 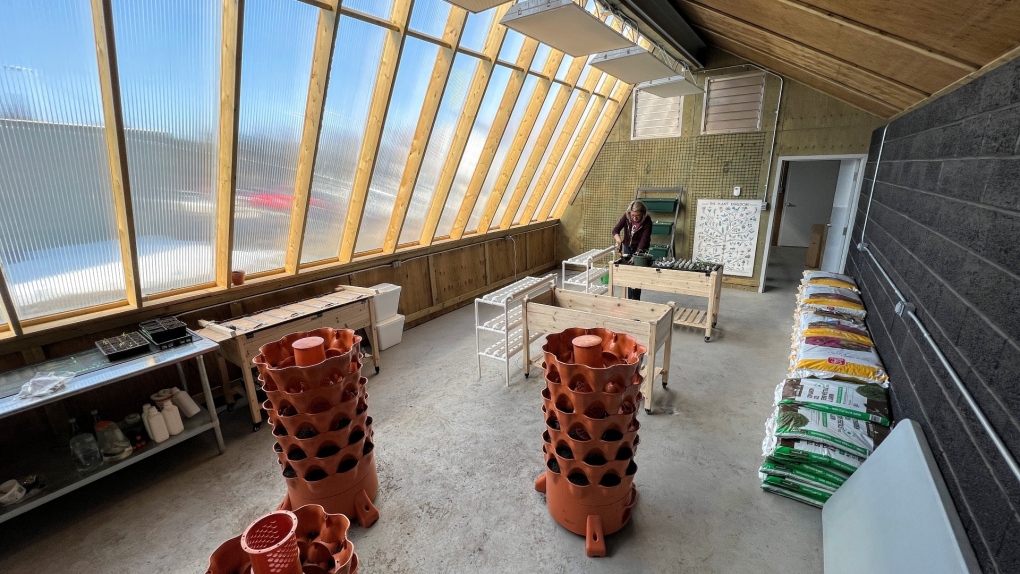 Supplied image of the greenhouse on the UCN campus in The Pas.

The greenhouse will be used to produce multiple growth systems. Seedlings for a variety of herbs and produce, including tomatoes, peppers, cucumbers, beans and spinach, have been planted and are already starting to grow. Most of this produce will be used in the campus cafeteria for culinary arts students and staff.

“We are starting to get growth. So we’ve got a lot of basil growing, parsley, we’ve got tomato plants growing. So there’s growth already in the greenhouse,” Stedronsky said.

“It’s going well. We’ve just had some issues gaining access to soil over the winter months.”

She noted they are looking at having produce by the end of June and will continue seeding all the growing systems to maintain the growth year-round.

If this project is successful, this type of greenhouse can be tested even further north.