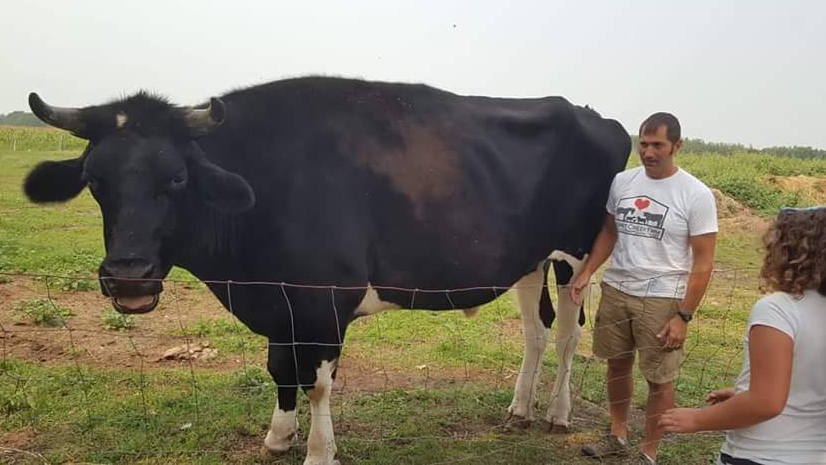 Supplied photo of 'Dozer' the steer. The animal measures six-foot-five.

A Manitoba farm sanctuary is inviting people to meet a gentle giant after a photo of an Australian steer towering over other cows went viral.

“Everybody is pretty much smaller than Dozer. Even our horses and everything else, nothing compares,” said Karl Schoenrock from Kismet Creek Farm, a family-run sanctuary for livestock in the Steinbach, Man., area.

Schoenrock said they took in Dozer the steer, who measured an inch taller than the Australian steer at six-foot-five inches tall Wednesday, from an owner seeking a better of quality of life for him last spring.

“She’s the one that actually saved him from a beef farm in Alberta, and brought him here to Manitoba,” he said, explaining that his owner was a vegan with no other cows of her own, and had dealt with Dozer breaking out to spend time at a nearby beef farm.

“So she found us and wanted to bring him here so he could live out the rest of his days with his friends that wouldn’t go for food.”

Schoenrock said he noticed the steer’s gentle nature standing next to his owner, who stood around five-foot-four.

“He is just so calm, with his demeanour.”

Dozer currently shares a pasture with two other steers and a horse at Kismet Creek Farm, which takes animals in to “live out their natural lives” without being bred or sold.

At six, Schoenrock said Dozer is of an advanced age for an animal that size. He said Dozer has seen a vet recently and is being treated for tendon issues in his legs.

He also said people can visit for a petting zoo open weekends or tour. Schoenrock said they collect an admission fee that goes toward the care of the animals.