Necas, Trocheck strike on power play as Hurricanes down Jets 4-2 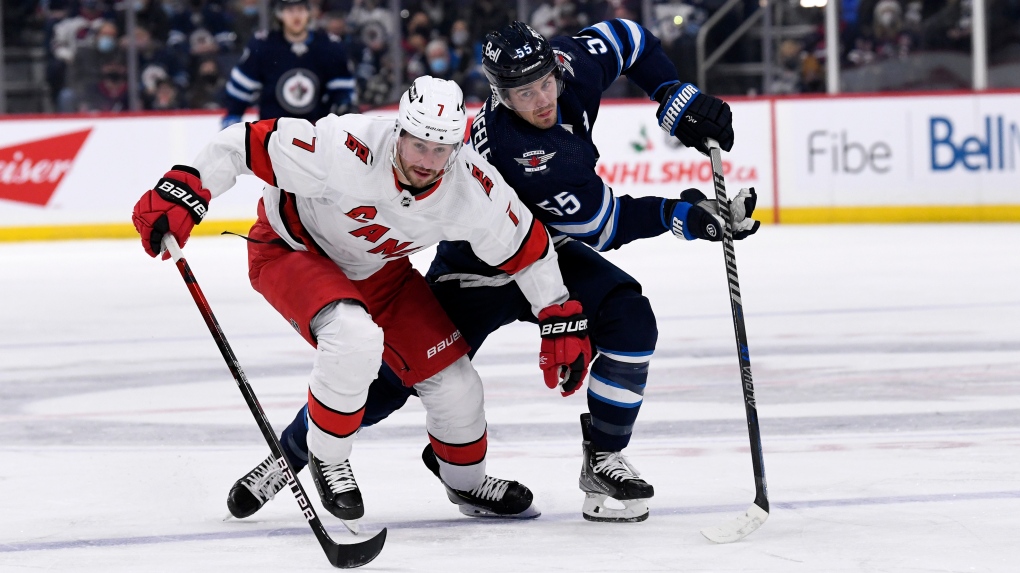 Scoring power-play goals is nice, but Carolina Hurricanes head coach Rod Brind'Amour was impressed with his team's penalty kill in a 4-2 victory over the Winnipeg Jets on Tuesday.

The Jets had a five-minute power play in the third period, but only put two shots at Carolina goalie Frederik Andersen.

"That could have been real crucial," Brind'Amour said. "If (the Jets) get one, they get momentum, who knows what happens?

"We didn't give them anything. Like I said, that was one of the big keys of the game, for sure."

Martin Necas and Vincent Trocheck each had a power-play goal for the Hurricanes (17-6-1). Jaccob Slavin and Sebastian Aho both registered a goal and assist and Nino Niederreiter had two assists.

Andersen made 16 saves for Carolina, which was starting a five-game road trip.

Nikolaj Ehlers and Pierre-Luc Dubois, on the power play, scored for the Jets (12-9-4).

"I think maybe a little bit more support to the guy that has the puck is something that we should have changed a little," Ehlers said.

"We did score a power-play goal today, but obviously when you're behind 4-2 and you get a five-minute power play, you want to at least get some momentum going. And we weren't able to do that. We'll be better next game."

The Hurricanes led 1-0 after the first period and 3-2 following the second.

"We just weren't prepared to play. That's my job," Jets head coach Paul Maurice said. "For the style of game that was going to be played today, we didn't skate nearly well enough to expect to win."

Slavin notched his first goal of the season 30 seconds into the game with a point shot through traffic that went under Hellebuyck.

Carolina almost ended the period with another goal, but Hellebuyck stopped a blast from Ethan Bear with under a minute left.

The Hurricanes outshot the Jets 15-5 in the opening period.

Carolina also scored early in the second period when Aho kept banging at the puck in front the net until he notched his 11th goal of the season at 1:12. A Winnipeg coach's challenge for goaltender interference was unsuccessful.

The Jets were assessed a delay of game penalty for the challenge, but Trocheck was called for hooking 33 seconds later and the play went to four-on-four. Ehlers then scored his 10th of the season with a high shot on the stick side of Andersen at 2:18.

Winnipeg had two power plays in the second period, both called on Cole for delay of game and then tripping, and the Jets made good on the second opportunity.

Blake Wheeler sent a pass to Dubois parked at the side of the net and he redirected the puck into the net with his stick between his legs at 16:06 to tie the game 2-2.

The Hurricanes ended the period with a power-play goal by Necas, who scored during a scramble in front of the net with 20 seconds remaining in the period.

Trocheck scored with the man advantage at 3:04 of the third.

Winnipeg finished one-for-five on the power play. Carolina was two-for-three.

"Penalty kill is something that we take pride in as a group...," Slavin said. "You step over those boards and you've got a job to do and everyone was up for the task tonight. That five-minute kill, it's huge."

Pionk was also placed in concussion protocol and won't make the trip when the Jets head out for back-to-back games in Seattle Thursday and Vancouver on Friday. He was kneed in the head by Leafs forward Jason Spezza in the third period of Sunday's game.

The NHL handed Spezza a six-game suspension for the hit on Tuesday.

Carolina plays the Flames in Calgary on Thursday.

This report by The Canadian Press was first published Dec. 7, 2021.