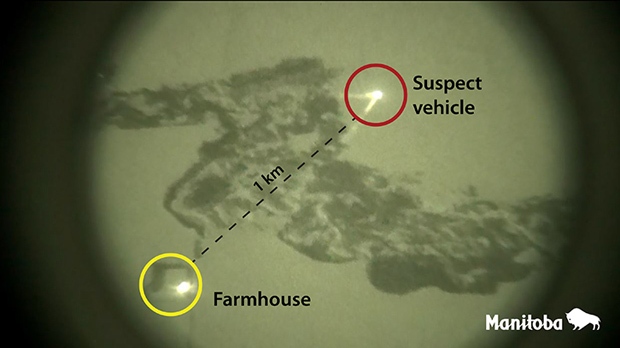 The province supplied this photo of aerial surveillance taken during an investigation on Dec. 12, 2016.

CARBERRY, Man. -- Manitoba Sustainable Development says four men have been fined thousands of dollars for using a spotlight to hunt at night.

Their hunting gear and vehicle were also seized.

Officials say the men were arrested in December 2016 in the Carberry area of southwestern Manitoba following numerous complaints of night-hunting.

An aerial-assisted patrol by police and more than a dozen conservation officers observed the men using a spotlight several times to light up a privately owned field.

The men tried to flee when officers on the ground moved in, but were arrested after their vehicle got stuck in a ditch.

The suspects pleaded guilty last October and have been fined a total of $4,000.

They are Mitchel Mousseau, 34, of Sandy Bay and Joshua Roulette, 25; Joseph Spence, 31; and Baron Kakewash, 44 -- all from Portage la Prairie.