'Not the same airport': Drop in traffic at Winnipeg airport results in layoffs 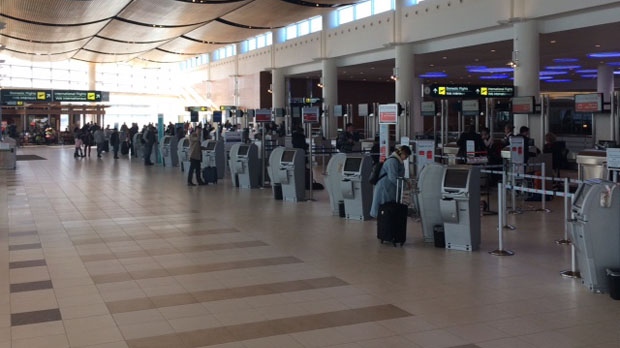 WINNIPEG -- Winnipeg Airports Authority (WAA) has cut salaries and issued temporary and permanent layoff notices affecting more than 20 positions, as airport passenger traffic has dropped up to 98 per cent due to the COVID-19 pandemic.

Tyler MacAfee, the vice-president of communications and government relations for the WAA, told CTV News that the travel restrictions put in place in Manitoba earlier in the pandemic are continuing to impact the airport service, which has led to the layoffs.

"We don't want to have to go down this process; I mean these are our friends and co-workers that we are talking about, so this is always a difficult process," MacAfee said, adding the layoffs impact about 10 per cent of the staff.

"The reality we have now is we are not the same airport we were before."

Normally, the WAA sees about 12,500 passengers a day come through the Winnipeg James Armstrong Richardson International Airport. Since March, that number has dropped to under 100 passengers at some points.

MacAfee said with the drop in passengers, there is no longer a need for as many staff in some areas of the airport, which has resulted in the temporary and permanent layoffs.

He said the WAA is still working with the Public Service Alliance of Canada (PSAC), the union representing WAA workers, to finalize which positions will be affected.

WAA told CTV News there has been a 25 per cent reduction of both union and non-union employees.

Hladun said the union members rejected an offer from the WAA that provided no guarantee of additional layoffs. Hladun said layoff notices were issued shortly after.

She was not able to disclose details of the offer made, but said it included 'significant concessions' on items fought for by the union.

"We have no idea what their future plans are, if there will be future layoffs," Hladun said. "We believe that we could have had other options. Our members understand that we are in unprecedented times, and we are open to having some discussions."

Hladun said the layoff notices take effect in 20 days, which she said violates the collective agreement. She said the union has filed grievances regarding the layoffs with the WAA.

"It is a true disappointment that there is not a willingness to discuss options that would provide some level of security for their employees," Hladun said.

MacAfee said the 20 day layoff period was signed off on by the union in a memorandum of understanding that was negotiated following the pandemic which aimed to minimize the impact of the pandemic.

"We have a place we have to get to as a company, and that’s not a negotiation we are having with the union – that’s the reality now. It's really a question of how do we get there," MacAfee said. "Unfortunately if the union is going to insists on the letter of every part of the agreement, then we are going to have to make deeper and deeper cuts."

He said WAA is willing to work out these issues with the union.

He said on top of the layoffs, non-unionized employees have taken a 10 to 30 per cent cut to salaries to provide in savings. MacAfee said additional cuts and layoffs are a possibility if there are more costs caused by the pandemic.

WILL TAKE UP TO FOUR YEARS TO RETURN TO NORMAL : WAA

On Wednesday, the province released its plan for Phase Three of reopening, which removes the mandatory 14-day isolation for those coming into Manitoba from western provinces and northwestern Ontario.

While these eased restrictions will bring more traffic into Winnipeg, MacAfee said it will still take at least three to four years to get back to normal capacity.

"Once some of this additional travel will be an option for people in western Canada, we will see a slight increase, but it's still going to take a long time to get back anywhere close to where we were in 2019," he said.

MacAfee said airports in Canada generate funding on a user-pay funding model. He said without the users, it puts pressure on operations. He said even if revenue is down, airports still have to maintain service.

He said the WAA has looked at different ways to reduce operating costs, including closing parts of the terminal and shutting off systems that aren't being used.

MacAfee said anyone boarding an airplane or going through security is required to wear a mask. There will be more educational signs posted in the airport explaining the health measures that are in place in Manitoba.