A Remembrance Day service in St. Norbert that started out small has grown into a large community gathering.

The tradition began when Art Bloomfield noticed a monument partially covered by overgrown lilies in 2008 at the Sainte Therese Avenue cemetery while walking his grandson to school.

Little did he did know hidden underneath was a limestone cenotaph which would become the focal point of Remembrance Day services in St. Norbert.

“It had really nice lilies, but they were about four to five feet tall,” said Bloomfield. “You couldn’t really see what it was. It’s not weeds, it’s just an older style of lily.”

A few weeks later he looked closer and saw the names of 13 soldiers engraved on the cenotaph from St. Norbert who fought and died in the First World War.

"It kind of broke me up," said Bloomfield. "I felt so terrible these guys were forgotten, so I wanted someone to do something." 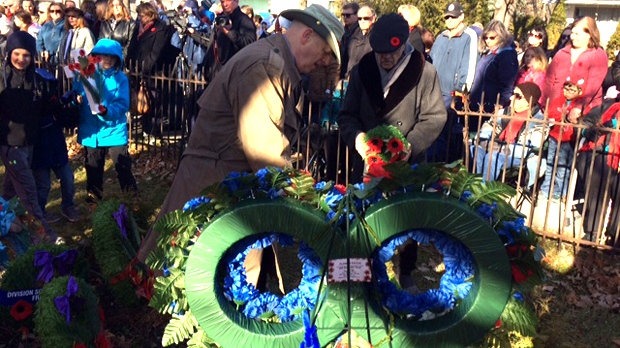 Art Bloomfield discovered the cenotaph in St. Norbert in 2008. He helped organized Remembrance Day ceremonies at the site, which has grown from 50 in 2010 to 500 in 2016. (Photo: Josh Crabb/CTV Winnipeg)

The community rallied to restore the long-forgotten cenotaph and the Fort Garry Horse began researching the soldiers whose names were on the cenotaph to find relatives.

In 2010, the St. Norbert Veterans Memorial Association formed and Bloomfield organized a Remembrance Day service at the cenotaph, which drew a crowd of around 50 people.

It has grown larger every year since -- 2016 marked the seventh year for the service, which drew a crowd of around 500 people.

“These guys are remembered, they’re respected and that’s important. You don’t forget your community,” said Bloomfield. “We just didn’t want it forgotten.”

READ MORE: Manitoba veterans reflect on the past

One of the names on that cenotaph is Pvt. Richard Fenton. He was a farmer who served with the Princess Patricia’s Canadian Light Infantry in Ypres, Belgium. He died in the trenches on June 4, 1916.

Fenton is the son of Harolyn Capstick’s great-grandfather’s sister. She now participates in the service by laying a wreath at the cenotaph.

“I think of how things have evolved,” said Capstick. “Being a representative of the family of someone on the cenotaph, I think it’s very important someone’s here and feel very privileged to do that.” 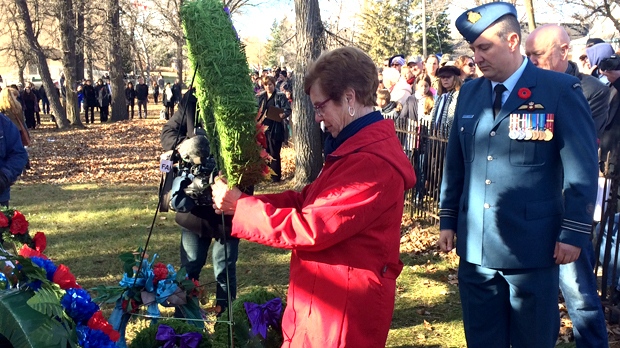 Harolyn Capstick is the great-granddaughter of Pvt. Richard Fenton, one of 13 soldiers whose names are marked on the cenotaph in St. Norbert. (Photo: Josh Crabb/CTV Winnipeg)

Bloomfield hopes more relatives of the soldiers whose names are engraved on the cenotaph will be found.

“There should be lots of relatives because they were big families,” said Bloomfield. “Hopefully there are relatives in the south of the province who will say, ‘That’s somebody we’re related to.’”