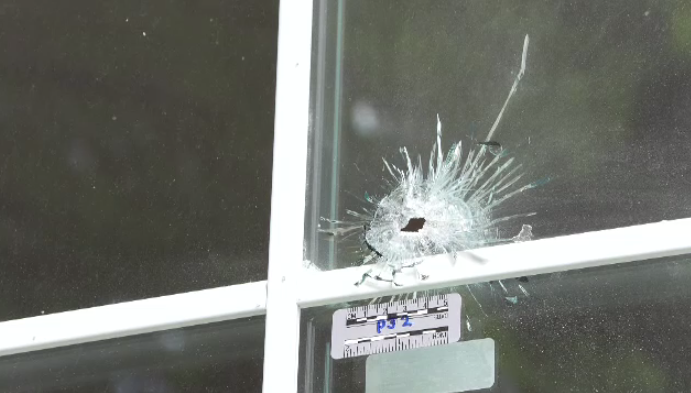 A bullet hole in the front window of a River East home after a shooting incident early Sunday morning (Source: CTV News)

Winnipeg police arrested and charged a 34-year-old man in connection to a shooting on Bonner Avenue Sunday morning.

Police were originally called to the 300 block of Bonner Avenue just after 2 a.m. on Aug. 7 for reports of a shooting.

The following day, police said they identified a suspect and executed a search warrant at the suspect's home in the 2700 block of Main Street.

On Aug. 9, police were able to arrest a 34-year-old man from Winnipeg.

Police believe the man originally attended a party at a home on Bonner with a friend and left early. Investigators said the man returned after his friend was involved in an altercation at the party.

Police said the man used a handgun and shot several rounds toward the home from his vehicle. No one was injured, but police added rounds hit a parked vehicle and a neighbouring home.

Erika Braun previously told CTV News that she and her husband were woken up by a bang sound on the window and found a bullet hole that had gone through their front window, the dining room wall and into their office.

"It is a little bit of a concern. I'm usually out at the lake, so when I come home and this happens, I want to move out," Braun told CTV News on Sunday.

Police said he remains in custody.

Police have also arrested another man in an unrelated incident after he was spotted walking around with a machete on Tuesday.

Around 7:30 p.m., officers were called to the Kildonan Place Shopping Mall after mall security saw a man armed with a machete.

Police attended the scene and arrested the man. He was found with the machete, as well as a sawed-off .22 calibre rifle and ammunition.

Police believe the man was in the mall trying to shoplift when mall security confronted him and told him to leave. Police said he left the mall without incident.

Cale Justice Fiddler, 21, from Winnipeg is facing multiple firearm-related offences and he remains in custody.

- With files from CTV's Dan Vadeboncoeur

Suspect in the deaths of a California family has been arrested for kidnapping and murder, authorities say

The suspect in the kidnapping and killing of four California family members, including their baby, was arrested late Thursday.