The new poll, commissioned by CTV Winnipeg and the Winnipeg Free Press, shows Murray with a commanding lead among candidates from respondents, with 40 per cent of decided voters saying they will vote for him.

“I take it as a huge responsibility,” Murray said Friday. “A lot of Winnipeggers are putting a lot of trust in me and our campaign to deliver on some very clear commitments to deal with our roads and our infrastructure and to deal with getting crime and dealing with homelessness and addictions. These things are really important to get the city's finances back in shape, get the city back on track.”

“I take that responsibility and that commitment to maintaining and earning their public trust really important. When I see poll numbers like that, that just puts a real sense of responsibility that we have to the people of Winnipeg.”

Murray, whose support dropped four percentage points from a July survey also completed by Probe, holds more than a two-to-one advantage over his next closest competitor. Fifteen per cent of decided voters said they would vote for Scott Gillingham, a one per cent drop from July.

Gillingham says people are starting to pay attention to the election.

“My focus doesn’t change,” he said. “I'm focused on delivering a credible plan for a stronger Winnipeg, and that really compares to you know, Glen's nostalgia. And I think by the time people get to the voting booth, they realize it's a clear choice between the future that’s stronger or yesterday's nostalgia.”

Shaun Loney saw the biggest increase in support, among mayoral candidates, going from six per cent among decided voters in July to 14 per cent this month, putting him in third place. Robert-Falcon Ouellette, who was third in July, saw the biggest drop in support, from 13 per cent down to seven.

“We're very excited, obviously, to double our support in such a short amount of time,” Loney said. “Winnipeg is really struggling with some major issues like homelessness and crime, and this is my expertise. And our hope is that Winnipeggers are seeing what I can offer the city.”

Kevin Klein, who entered the race in late July, ranks fourth with 10 per cent of decided voters saying they’d vote for him. 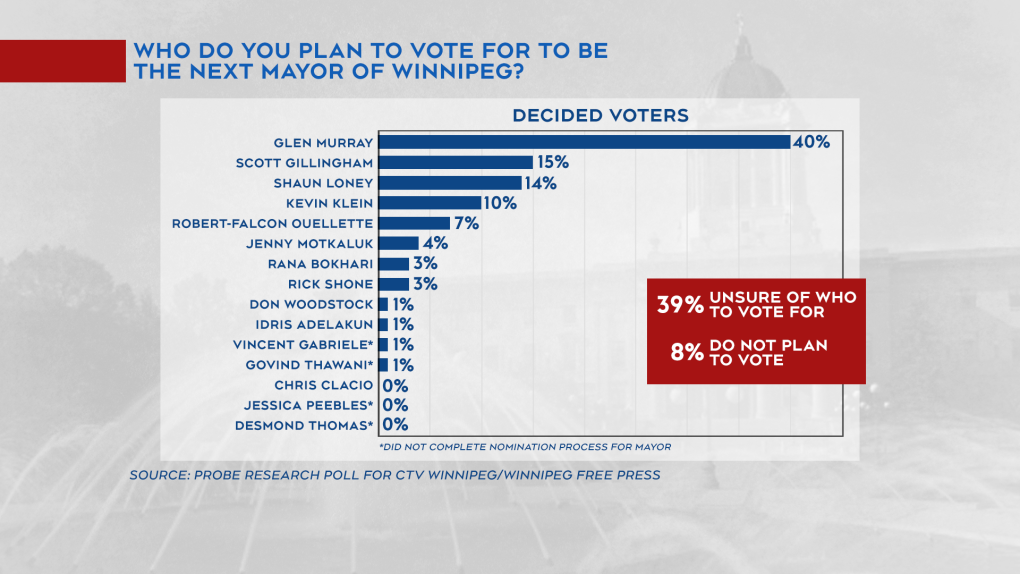 The remaining candidates all received single digit or no support in the poll.

The survey also included four candidates -Vincent Gabriele, Govind Thawani, Jessica Peebles, and Desmond Thomas- who registered to run for mayor, but did not complete the nomination process by the Sept. 20 deadline. Of the candidates, Gabriele and Thawani each received one per cent support, while Peebles and Thomas received zero per cent.

Murray’s popularity in the poll comes from a broad range of people in the city. According to the poll, he leads in all areas of Winnipeg, with the highest percentage of support (48 per cent) in the city’s core.

“He has some of these key pockets of voters sort of locked down; older folks, women, he's got support across the city, not just in the core,” said Mary Agnes Welch with Probe Research. “There's broad and reasonably solid support for him.”

Gillingham is the most popular candidate among supporters of the Progressive Conservatives (32 per cent), while Klein is ranked second among Tory supporters (20 per cent).

Loney is the second most popular candidate among provincial NDP supporters with 23 per cent support, and has significantly higher support among university graduates.

Ouellette is the most popular candidate among Indigenous Winnipeggers (19 per cent) and BIPOC/racialized citizens (17 per cent).

Probe Research also took a look at undecided voters in the city, with results showing nearly four in 10 voters are still unsure about who they’re going to vote for.

According to the poll, 39 per cent of those who responded said they were undecided on who they would vote for, while another eight per cent will not vote on Oct. 26.

Welch said there are two ways voters can look at the current poll numbers.

“First, you could say Glen Murray has such a significant lead, that it's almost insurmountable at this point,” she said. “The other way to look at it, though, is we still have a month, five weeks, and there is a really big, undecided pool of voters who could switch. They could kind of be the decider.

“We also might see a little bit of coalescing around one anti-Glen Murray candidate , whether that's Gillingham or maybe Kevin Klein, that may also start to kind of foment in the next few weeks.”

Probe Research said 600 adults in Winnipeg were surveyed between Sept. 8 and 18.

“With a sample of 600, one can say with 95 per cent certainty that the results are within ± 4.0 percentage points of what they would have been if the entire adult population of Winnipeg had been surveyed. The margin of error is higher within each of the survey’s population subgroups,” Probe said.

The five-member Pivot Airlines crew, who had been detained in the Dominican Republic for almost eight months, is now back in Canada. An emotional airport reunion took place in a special pre-arrivals area of Toronto Pearson International Airport, as the two flight attendants, pilot, co-pilot and mechanic were greeted by family.

The Toronto man accused in a large drug and gun bust is speaking out, saying on the stand at his trial that he’s a not a major drug dealer, but a 'bio-energy healer' who was as surprised as anyone to find dozens of guns and millions of dollars in drugs in his shared apartment.

Four Indigenous women in Winnipeg are believed to be dead at the hands of an alleged serial killer.

Turbines that once harnessed the powerful energy of Niagara Falls into a great source of electricity came to a halt years ago. But the secrets deep below the power station are coming to life once again. Visitors can now explore the former cathedral of power and a new tunnel that opens to a spectacular view of the falls.

WestJet has declined to provide compensation to passengers who were stuck in a sweltering airplane cabin in Jamaica earlier this month, claiming the flight was cancelled because of 'a security-related incident' outside the airline's control.

Canadians can now apply for new dental benefit: here's how

As of Dec. 1, eligible Canadians can apply through the Canada Revenue Agency to receive funding as part of the first ever federal dental-care program, and as of Dec. 12 applications will open for low-income renters looking to access the one-time top-up to the Canada Housing Benefit.

A fiery train derailment closed a highway in southeast Saskatchewan on Thursday morning. A train derailed approximately two kilometres northwest of Macoun, Sask., forcing the closure of Highway 39 in both directions, RCMP said.