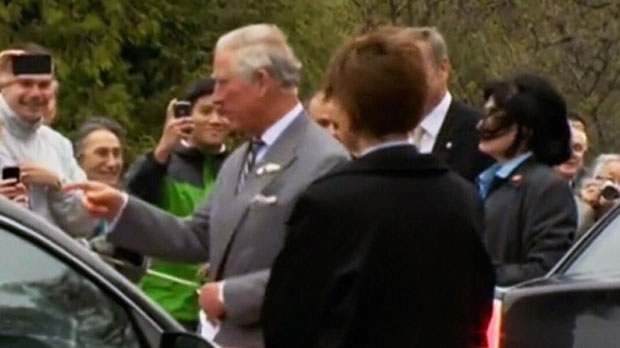 Prince Charles steps out of a vehicle after arriving in Winnipeg the evening of May 20, 2014.

A media report that Prince Charles likened Russia's president to Adolf Hitler during a private conversation in Halifax is the latest sign that the Prince of Wales is more inclined than his mother to discuss touchy political topics, says a royal expert.

Carolyn Harris of the University of Toronto says Canadians have grown used to the Queen's quiet and diplomatic comments to people she encounters.

But she says the remark attributed to Charles in Halifax adds to the growing impression the Duke of Cornwall is more controversial.

"This will become part of a wider public perception ... that he is not shy about expressing political views," Harris, who teaches history and studies the royals, said in a telephone interview Wednesday.

"The Queen has been very careful to be an impartial constitutional monarch and that's what the public has come to expect."

Britain's Daily Mail said Charles made the comment during a visit Monday to the Canadian Museum of Immigration in Halifax.

The newspaper reported museum volunteer Marienne Ferguson as saying her Jewish family fled to Canada from Poland when she was 13, but that other relatives failed to flee before the German army arrived in Gdansk in 1939.

It quoted Ferguson as saying she told Charles about her family background and how she came to Canada, and that Charles then said to her: "And now Putin is doing just about the same as Hitler."

Ferguson could not be reached for comment about the report and the museum refused to confirm the comments.

A spokeswoman for Clarence House, the residence of Prince Charles, said: "We don't comment on private conversations."

"We do like to stress that the Prince of Wales wouldn't seek to make a political statement during a private conversation," she added.

Tension has increased between Putin and the West since Russia's annexation of Crimea earlier this year.

John Fraser, the author of several books about the monarchy in Canada, said while Charles has a different style from the Queen, it's possible he will be more reserved as a constitutional monarch.

"He has more licence than she does at the moment," Fraser said. "She has huge restraints on her as the constitutional head of 19 countries and he just doesn't."

Robert Hardman, the author of a biography of the Queen, said the unrecorded comment won't have the same long-term impact as some of Charles's written pronouncements.

The prince's leaked 1997 diaries about the handover of Hong Kong -- which described Chinese officials as "appalling old waxworks" -- was a more serious example of strong political views, Hardman said from London, England.

"This is hardly a constitutional crisis," he said of the incident in Halifax.

It is an indicator Charles may have to watch his wording more carefully in the future, he added.

"He's a different generation. Every monarch has their own style. Nobody expects one reign to be a carbon copy of the next," he said.

The prince's reported comments have caused a media storm in Britain, where Charles has sometimes been accused of compromising the Royal Family's political neutrality with his strong views on topics including education, architecture and the environment.

Labour party MP Mike Gapes weighed in with a tweet that suggested Charles should have kept his comments to himself.

"In constitutional monarchy policy and diplomacy should be conducted by parliament and government. Monarchy should be seen and not heard," he tweeted.

When someone asked him about the prince's right to free speech, he replied on Twitter: "If you are heir to throne or monarch what you say matters. Normal 'free speech' argument not relevant."

But Deputy Prime Minister Nick Clegg told the BBC the prince was "free to express himself."

"I have never been of this view that if you are a member of the Royal Family somehow you have to enter into some Trappist vow of silence," said Clegg. "I think he is entitled to his views. But I don't know whether those were his views because I just don't think providing a running commentary on what were private conversations is useful to anybody."

Hardman said there may be some awkward moments in two weeks when the prince and Putin attend events in France to mark the 70th anniversary of the D-Day landings.

"His path and Putin's may cross. I expect the diplomats will choreograph events to satisfy everyone," he said.