A proposed silica sand mine is dividing some people living near the site of the development, about 200-kilometres north of Winnipeg on the east side of Lake Winnipeg.

Proponents of the Wanipigow Sand Extraction Project are promising150 jobs and economic benefits for the area, while opponents are questioning the environmental risks.

Calgary based Canadian Premium Sand wants to mine and ship silica sand to Alberta where it can be used for fracking oil and gas.

"Qualities of this silica sand are that it is very pure, the grains are extremely round and it’s very strong," said Bronwyn Weaver, a communication and community liaison officer with the company.

"Those three qualities mean that it is a tier one silica sand, which has a lot of value to a lot of different markets.”

In its Environment Act Proposal, the company states the total footprint over 54 years will be 353 hectares, with land about the size of five hectares each year to be mined at depths between 10 and 30 metres, beginning in 2019.

As the project expands, the company said it plans to restore land while one plot is mined and prepare the next section for the following year.

The sand is collected from leases on Crown land, which the company said will be stockpiled and carried on a covered conveyor to a plant where sand is washed and dried. It believes it could produce between a million and two million tons of silica sand a year.

The new mine being proposed is not the first silica sand operation area. For decades, it was mined on nearby Black Island.

It's been more than two weeks since people against the project set up a camp. They said they're prepared to stay for several months.

Some worry what the environmental impact will be and if the jobs will be for community members.

"This issue has been dividing our community. There's people on this side and people on that side," said camp spokesperson Lisa Raven who is also a band member of Hollow Water First Nation.

"It's not going to help people initially and so they are going to have to bring outsiders, which raises a number of questions," he said. 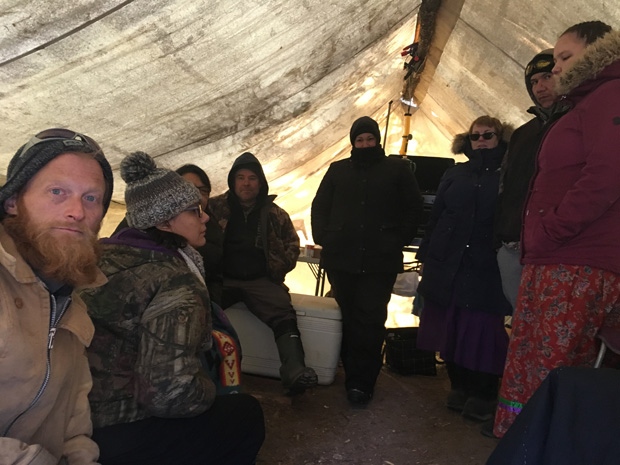 He told CTV News environmental concerns have been addressed, and all the jobs will go to people in the area except those doing training.

"The young generation needs a lot of jobs. Some community members are scared of the change, but the change is for the good," he said.

"There will not ever be a big open pit, we are not using any water from the lake, or there will be no water discharged into the lake, and all of our sand processing will be inside buildings so we can manage our dust responsibly," said Weaver with CPS.

She said the company has held dozens of meetings since July 2018 and made changes to its plan based on feedback.

"We know we just have to earn to their trust and the only way we can do that is by making plans with the community, following through on those plans and being transparent," Weaver said.

The company said the project will help create other local businesses and it’s talking to a tele-communications company that could bring better cell service.

The company set aside $500,000 as part of an economic partnership with Hollow Water First Nation.

The First Nation told CTV News it received $250, 000 from the company last year.

Another $250,000, in two separate instalments is expected if the project goes through.

In an email to CTV News, the province said it's currently reviewing the environment act proposal, and environmental safety, including health and safety, is a component.

"CPS has been doing work under an approved permit for preliminary geotechnical and exploration work, which is a normal process and permitted in the early stages for any project," said a spokesperson.