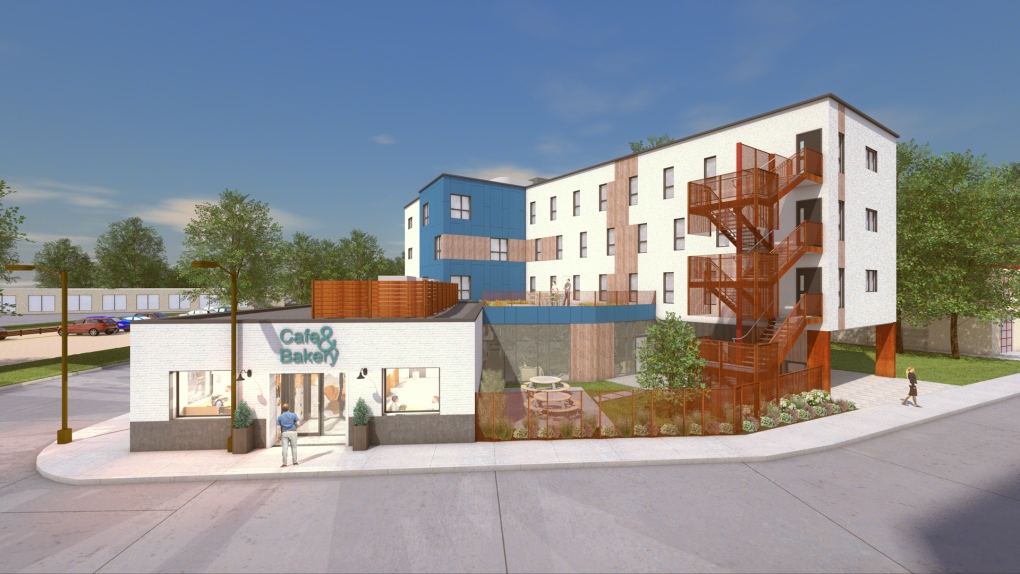 WINNIPEG -- A proposed sober-living housing project coming to Winnipeg's Elmwood community is taking a different approach to combat homelessness and addictions in the city - one that organizers believe will catch on.

All that stands on the corner of Talbot Avenue and Stadacona Street is a derelict building and an empty gravel parking lot, but for Don Kroeker this piece of land holds much more potential.

Starting in the spring of 2020, he wants the piece of land to help change lives.

"The vision is that there are homeless people who would really like to change. We want to help them," said Kroeker, who is the chairperson for the Riverwood House project and founder of Winnipeg Supportive Housing Inc.

The Riverwood House would be Winnipeg's first supportive sober-living housing project. The project is offering 40 apartments for those recovering from homelessness and addictions, along with an on-site restaurant to provide meal programs for residents.

The goal of the project is to help the residents achieve long-term housing and sobriety. The timeline of recovery is up to the residents, Kroeker said.

"As long as they want to and are retaining their sober living approach and not causing problems for others, they can stay," he said.

Kroeker said he came up with the idea for the project over two years ago with his wife after reading media reports about the growing rates of homelessness.

"We finally decided that it would be important for us to take some kind of action to help," said Kroeker.

The project began to take shape when Riverwood Church came on board as a partner for the project.

The church has a number of programs for the community, so when Kroeker approached the church's community pastor Jon Courtney, he said it was a natural decision.

Riverwood Church is now the lead in the project, with the partnership of Winnipeg Supportive Housing Inc.

"We've seen the impact of addiction growth, not just in our city, but in our neighborhood. It's a constant issue that we are facing," said Courtney. "When this opportunity came up, we felt like these are all pieces that are coming together that would really offer a great solution for this issue and provide maybe an emerging model of how we can achieve success in helping people through recovery."

Kroeker said he's been working with a number of shelters and missions in Winnipeg to research the project. He said he views the Riverwood House as a kind of pilot project for the city.

The project, which currently comes with a $6.4 million budget, is currently in the process of zoning with the City of Winnipeg. Kroeker said he hopes to break ground in spring of 2020.

On Monday, Jan. 6, the city’s property and development committee unanimously passed the required rezoning for the project.

He said the Riverwood House team is applying for grants from all levels of government and is accepting donations to raise the money. He said so far, the project has $1.5 million in commitments from donors.