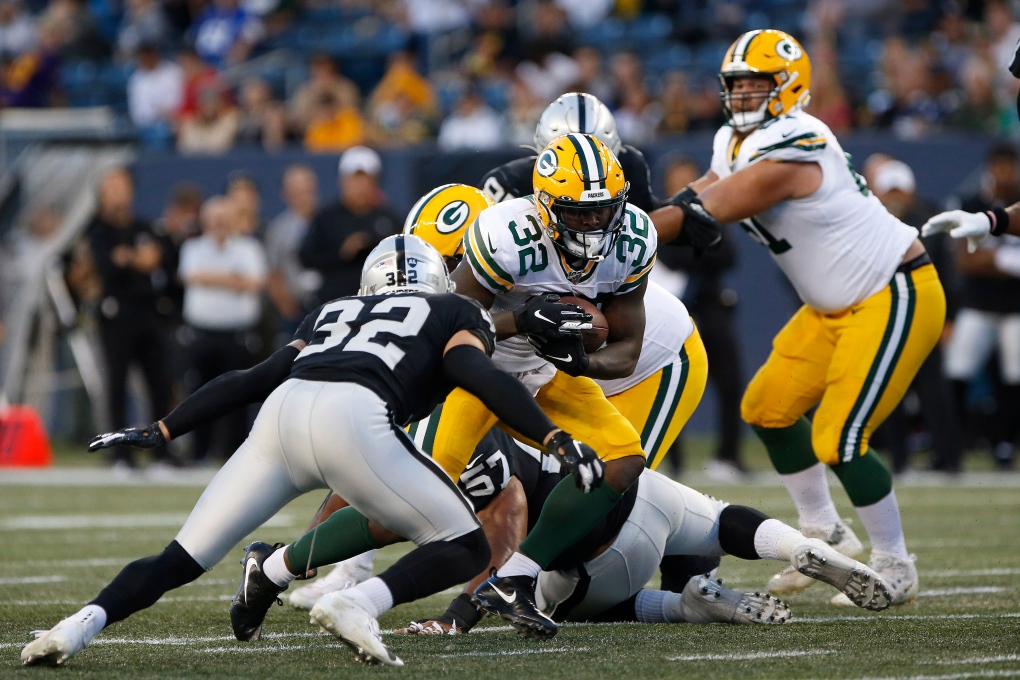 Raiders kicker Daniel Carlson booted a 33-yard field goal with eight seconds remaining in the game as Oakland defeated the Green Bay Packers 22-21 in pre-season action Thursday on a reconfigured field in Winnipeg.

The NFL teams played on a field shortened because of concerns over the condition of IG Field.

The regular 100-yard NFL playing field was shortened to 80 yards. The end zones were marked with bright, orange pylons at the 10-yard lines and there were no kickoffs.

"Tonight's game is being played on a reconfigured field," a statement from the NFL said. "The field met the mandatory practices for the maintenance of surfaces for NFL games based on an inspection yesterday.

"Concerns arose today surrounding the area where the (Winnipeg) Blue Bombers' goal posts were previously located. The 10-yard line will function as the goal line at this game. In lieu of kickoffs, the ball will be placed at the 15-yard line."

Promoter John Graham, president of On Ice Entertainment Ltd. that was in charge of the field conversion, told The Canadian Press in a text message that he'd "like to wait" before making a comment.

Before warmups, game officials and staff from both clubs were on the field examining the patches of turf that covered the spots where the goal posts for 110-yard CFL games were removed, which were in the playing surface of the NFL end zones.

The home field of the Bombers had been converted for the smaller NFL size, with new painted lines, goal posts located at the back of the new end zones and turf added all around the field to cover the regular asphalt.

Packers head coach Matt LaFleur decided to sit 33 players, including many starters such as star quarterback Aaron Rodgers and running back Aaron Jones.

Rodgers hasn't played in the pre-season, including last week when he had tightness in his back.

"(The field) definitely looks odd," said Winnipeg native and fan Chris Sellar, who was sporting a Packers jersey, cheesehead hat and a green plaid kilt. "My disappointment is that the starters they promised were playing didn't play, Aaron Rodgers, Aaron Jones."

LaFleur had said this week Rodgers would be a game-time decision. The 15-year veteran pivot did take part in the warmup.

"But they promoted it like they were all going to play," Sellar said. "For folks who paid $300 a seat, I'd be pretty disappointed."

Sellar and a friend bought the reduced end-zone tickets for $75 plus taxes and fees, for a total of $94.25 each.

Attendance was announced at 21,992. Organizers had estimated ticket sales would be about 20,000, including seats in the 40-plus suites.

The event had drawn controversy since ticket prices were announced in June.

Tickets were $75 to $340 before taxes and fees. The limited cheapest upper-deck ones sold out fast. Up to 6,000 end-zone tickets were recently reduced through a sponsorship deal to $75 from $164.

Oakland was the home team and its logo was at centre field and on sideline boards. Fans wore jerseys from both clubs, with some painting their faces in the teams' colours, and did the wave in the fourth quarter. The halftime show was Winnipeg band Attica Riots.

Carlson got the scoring going with a 42-yard field goal at 3:21 of the first quarter.

Peterman squeezed the score 21-19 when he threw a 17-yard TD pass to De'Mornay Pierson-El at 9:12 of the fourth. A two-point pass attempt was intercepted by Packers linebacker Brady Sheldon.

The game was the first NFL contest in Canada since the Buffalo Bills completed a run of eight games in Toronto with a regular-season clash against the Atlanta Falcons in December 2013.