Government of Canada agriculture officials say a drought like the one Manitoba is experiencing happens about once in every 10 to 20 years.

Take a stroll on Old Drover's Run Golf Course in Niverville, and the signs of a drought are easy to find. Cracks in the earth reveal how parched parts of the province have become.

He said the dry and windy spring has made it a stressful start to the golf season.

"Especially for golfers coming out, their itching to play and they want it to be nice and green and we have some greens that are green, but our fairways are really brown," said Baldwin.

The course has been relying on extra chemicals and pumping from retention ponds to spruce up the lawn.

The Canadian Drought Monitor is the official source for monitoring and reporting of drought in Canada.

It shows several parts of Manitoba in the grips of a severe drought that has been building for months.

"Going into the winter, we did have those dry conditions. Precipitation over the winter was really abnormally low," said Patrick Cherneski with Agriculture and Agri-Food Canada during an interview with CTV News in Regina. 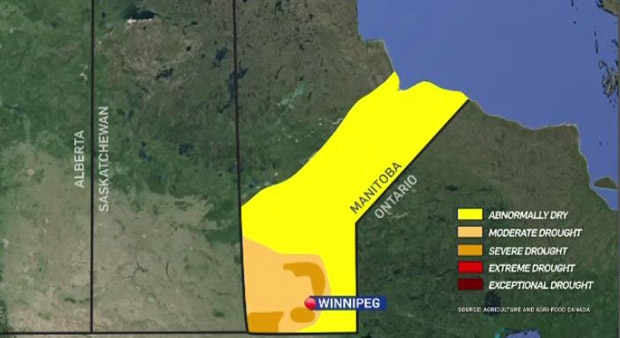 The lack of moisture is not helping the look of Cassandra Turcotte's lawn.

On Monday, the town of Niverville put a water ban in place because of low reserves, affecting about half of the town's 5-thousand residents who don't have wells.

It's such a serious situation, a bylaw officer is going door to door warning people.

The ban means no water for hot tubs, pools or lawn watering.

"We're trying to think of ways to get it watered without using our hose, joking about getting bottled water,” said Cassandra Turcotte.

‘Driest start to the year’

Environment and Climate Change Canada says the Winnipeg area is experiencing the driest start to the year since it began keeping records, about 140 years ago.

Since January, the region has only received about a quarter of the normal precipitation compared to other years, and any significant rain isn't expected for about two more weeks.

"They just can't buy a drop a rain. It's almost as if nature has forgot how to precipitate in that area and nothing seems to be on the horizon," said David Phillips, senior climatologist with ECCC.