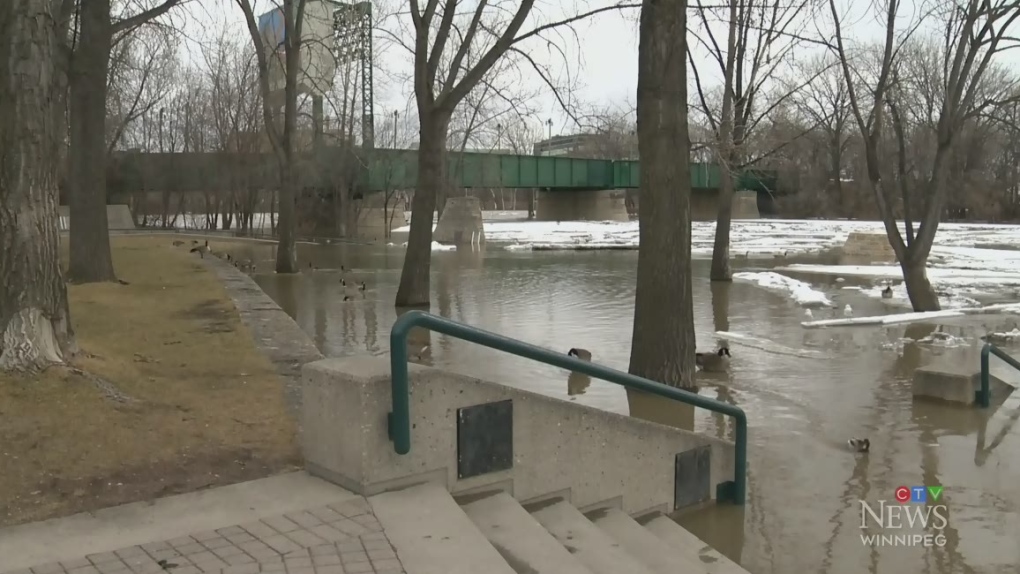 WINNIPEG -- The province has released its report on the unprecedented 2019 fall operation of the Red River Floodway.

The report, which was released Friday, said September 2019 precipitation amounts in some areas of southern Manitoba were already as high as 400 per cent above normal.

Based on those figures, and the expected snowfall from the Colorado Low which swept into Manitoba during the Thanksgiving weekend, the decision was made to divert water from the Red River into the floodway.

In a news release, Infrastructure Minister Ron Schuler said the province invoked Rule 4 to operate the floodway from Oct. 9 to Nov. 7.

Rule 4 allows emergency operation to reduce the risk of sewer backup and to reduce the anticipated flood crest in the city of Winnipeg.

According to the report, the rule can only be invoked when river levels are expected to rise to 14 feet at James Avenue Datum or higher for the next 10 days and there is a risk of an intense rainfall event in Winnipeg.

Both conditions were met leading up to the mid-October storm.

“Because of heavy precipitation in the October storm, the province activated the Red River Floodway for the first time ever in the fall to control river levels within Winnipeg and prevent basements from flooding. The floodway operation achieved that goal, ” Schuler added.

The report said the month-long diversion kept James Ave. levels at 17 feet, by sending 556.3 million cubic metres of water, or the equivalent of 222,000 Olympic-sized swimming pools, into the floodway channel.

Flood levels in that area during the crest were said to be about .91 of a metre.

Schuler further noted that in November, Manitoba announced a compensation program for eligible applicants to cover property damage or economic losses incurred as a result of the Rule 4 operation between Oct. 9 and Nov. 7.

Until 2019, the floodway had never been operated later than August, although it had been used under Rule 4, four other times in its 50-year history.