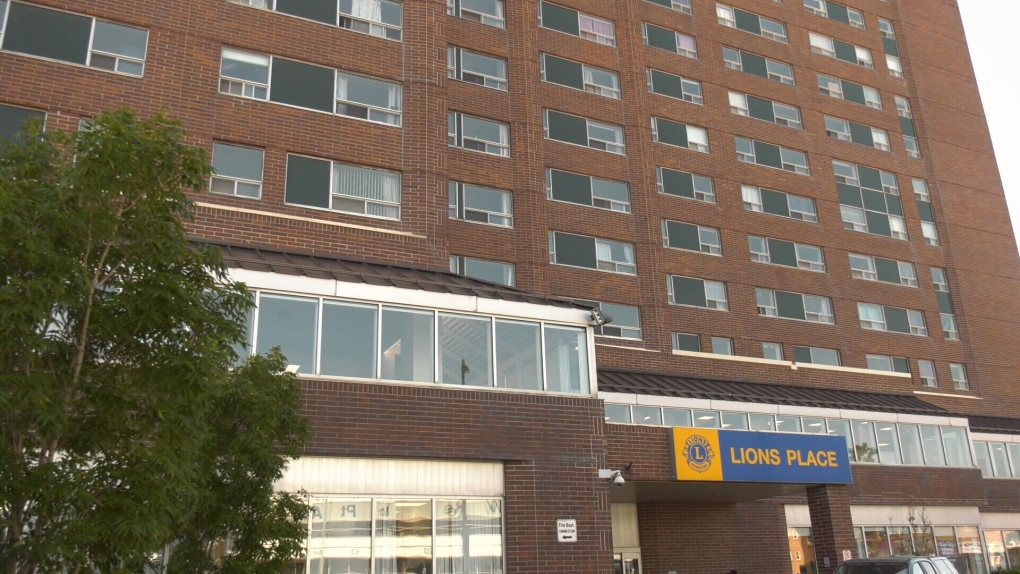 A group of residents in a non-profit housing complex that’s been put up for sale is calling on the Manitoba government to intervene.

People living at Lions Place in downtown Winnipeg were informed in late July the current owners can no longer afford to operate it.

The 287-unit building is mainly home to tenants who are 55 years old and over, who live on low or modest incomes.

“It is worrisome about the sale and if the rent’s going up or what,” said Melodee Ceicko, who was visiting her 93-year-old dad and 89-year-old mom who are longtime residents. “They’ve been here since 2002.”

Lions Housing Centres has previously confirmed a search is underway for new owners because upgrades to the building are needed which the organization said it can’t afford. It’s leaving residents concerned about what a sale would mean for their monthly rent payments.

Members of the Lions Place Residents Council are calling on the Manitoba government to step in to stop the non-profit from selling off the housing complex.

“We need a plan,” said Gerald Brown, chairperson of the Lions Place Residents Council Seniors Action Committee. “We need them to come to the table.”

Brown has lived in the building eight years.

He’s worried if it’s sold to a private owner, monthly rents which currently start at $844 a month, will rise and tenants will be priced out.

“People who are between 55 and 105, average age 77, really do have some concern about where they might go,” Brown said.

Residents were joined at a news conference by the Right to Housing Coalition outside a different apartment building in downtown Winnipeg.

The building at 185 Smith Street was previously owned by Manitoba Housing until it was sold by the provincial government and converted into upscale lofts. It’s a transformation advocates worry could occur at Lions Place if it’s sold to a private owner.

“Housing supply, affordable to low and moderate-income renters, continues to shrink as the provincial government and some non-profit providers sell their buildings to for-profit developers and property managers,” said Shauna MacKinnon with the Right to Housing Coalition.

Gilles Verrier, executive director of Lions Housing Centres, told CTV News Winnipeg on Tuesday, half of the potential new owners who have come to view the facility have been non-profits.

He said an investment is needed to keep the building running.

Ceicko just hopes her parents can afford to stay.

“They’re worried but they’re getting older so my mom just tries to not worry about it,” Ceicko said.

A 35-year operating funding agreement between Ottawa, the province and Lions Place ended in 2018. A deal was reached at the time to help residents with their rent for two additional years but it’s no longer in place.

A provincial government spokesperson said it is aware of the concerns raised. While Manitoba Housing doesn’t own the building, officials will be meeting with residents to address their concerns.

The residents group said it’s already had discussions with the federal government and will be meeting with Lions Housing Centres later this week.

'Bring them back!': Calls to bring Canadians home from Syria come from inside and outside of court

'Bring them back!' activists yell at lawyers as they walk into the Federal Court in Ottawa, where a judge will decide whether or not to order the Canadian government to repatriate more than 40 Canadians imprisoned in northeast Syria.

What is the 'white elephant' gift exchange?

With the holiday season in full swing, families and friends looking for a more unconventional way to give gifts can look no further than to the 'white elephant' gift exchange, but what is it exactly?

Donald Trump's company was convicted of tax fraud on Tuesday in a case brought by the Manhattan District Attorney, a significant repudiation of financial practices at the former president's business.

The Federal Court of appeal says it will uphold all but one of the rules that bolster compensation for air passengers subjected to delayed flights and damaged luggage.

In the 73 minutes on Tuesday afternoon that it took for Prime Minister Justin Trudeau and five other dignitaries to officially open the 15th global talks to save nature from human destruction, statistics suggest another 4,000 hectares of forest around the world was lost to that same force.